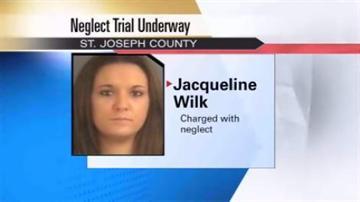 SOUTH BEND, Ind. -- Close to a dozen witnesses testified in the trial of the New Carlisle mom whose two sons died after being found in a car trunk. 25-year-old Jacqueline Wilk of New Carlisle faces neglect charges in connection with their deaths.

The prosecution’s witnesses helped paint a picture of how the two little boys ended up in the trunk of their mother’s car.

In all 9 witnesses were called to testify, including crime scene investigators, the doctor who performed the autopsies and Wilk’s mom and stepfather.

During the investigation, Wilk said she was studying from a radiology textbook in her parent's basement and may have fallen asleep, but her defense attorney stated during opening statements she only lost track of her sons for 15-20 minutes.

However several investigators with St. Joseph County's Metro Homicide Unit (MHU) who took the stand said they found no books in the house where Wilk claimed she was studying.

Ralph Young, Wilk's stepfather testified that he left for work the day the incident happened around 4:30 a.m. and received a call from Wilk around 3 p.m. telling him both of her boys were being rushed to the hospital.

As for Wilk's mother Nancy Young, she too testified she was at work when the tragedy happened. She said she left that day around 9 a.m. headed to a Merrillville jewelry store where she has worked for years.

New Carlisle Officer Brian Thompson was on of the first responders who arrived on the scene that day. He told the jury he overheard Wilk on the phone saying she lost track of the kids for about an hour prior to finding them in her locked trunk.

Sgt. Tom Cameron with MHU said he observed a stool pulled up to one of the kitchen cupboards and it looked as if the children may have done so to access some sticky buns that were found opened on the counter-top.

However, Lance Anderson a technician with the MHU identified pictures of the kitchen as it was when he entered to do his investigation and there wasn't a chair pulled up to the kitchen counter as Sgt. Cameron described.

The defense attorney asked him if crime scene investigators could have moved things around before the pictures were taken and as far as he knew he said nothing was moved to his knowledge. It wasn't clear if the Sticky Buns were on the counter-top.

He also testified that there were several small red stains on the inside of the trunk that he identified in pictures that were presented by the prosecution.

Dr. Prahlow a Forensic Pathologist who conducted both of the boy's autopsies said he found fresh injuries on both of the children's hands. However, he told the jury he couldn't say whether the injuries were from the children trying to get out of the trunk.

He also said he could not determine how long the children were in the trunk and it would be very difficult if not impossible to answer that question from a scientific point of view.

Dr. Prahlow said in those conditions it would generally take 15 minutes for a child to die in a closed trunk, but he noted in some cases it has been upward of an hour.

The state will rest Wednesday after a police interview is played to the jury. On the video recording the MHU's lead investigator Galen Pelletier interviews Wilk on June 22, 2011. St. Joseph County Deputy Prosecutor Mark Roule told Judge John Marnocha that the interview is close to an hour and a half long.

The trial will resume at 10 a.m. Wednesday morning. After the tape is played the prosecution says they will rest. Then it is the defense's turn to call witnesses. Wilk's attorney Charles Lahey said he will be calling around 8 witnesses.