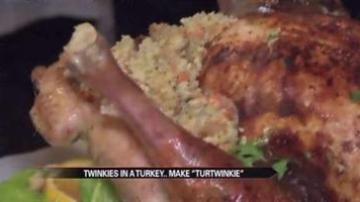 NEW YORK. -- The fate of the Twinkie has been in the news a lot lately but this Thanksgiving one caterer decided to give thanks in a special way.

Instead of stuffing he put Twinkies inside his turkey.

He says it's his mom's "secret" recipe.

Now they didn't shove whole Twinkies into the turkey. They "de-creamed" the Twinkies, then crumbled the golden sponge cake into the regular stuffing.  They are Calling it "Turt-Twinkie."

"When we're breaking down the Twinkies we reserve the cream, sweet, has the sugar in it... we rub the turkey with that," said NAME REMOVED.  "It's not fully Twinkie... if it was all Twinkie it'd be a little too sweet."

He along with those at the "Turt-Twinkie" taste test say it was delicious.