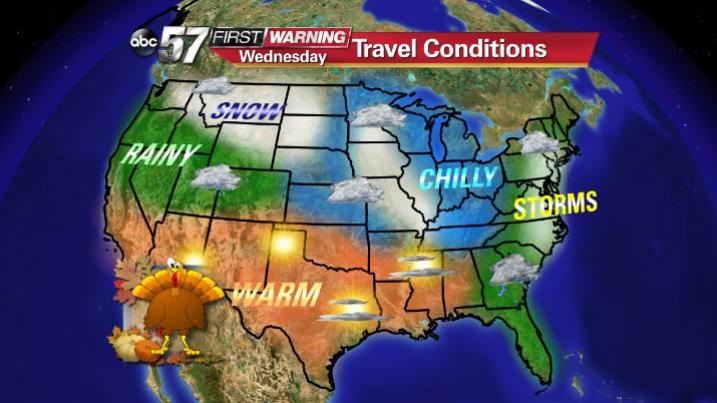 Thursday 9:00 PM Update:  A line of lake effect snow showers still persists from Niles, down to Elkhart, Dunlap & Goshen.  The largest snowfall report was from Dunlap with 4" while areas north of US-6 have seen at least 1.5".  Roads have become very slick, with reports of slide offs becoming more common after sunset especially along the bypass.  The lake effect snow band will taper off within the next couple of hours, however expect slippery road conditions through early tomorrow morning.  Drive carefully if you are planning on catching any of those Black Friday Deals.  --Jackie

Wednesday 4:00 PM Update: Local travel tonight still showing no issues.  For Thanksgiving Day, light snow showers start after 7AM, especially in areas north of US-6.  We could see some heavier snow showers at times, which could reduce visibility throughout the day.  Through early hours of Black Friday, we could see up to an inch in areas closest to the lake, mainly sticking north of US-6.   --Jackie

Wednesday 10:00 AM Update: Travel forecast for today still remains the same with local travel showing no issues and flights off to the far northeast being in jeopardy of delays and cancellations. Your Thursday travel gets a little rougher around Michiana with lake enhanced snow settling in after midnight for Southern Michigan and far Northern Indiana. This will hang around on and off into late tomorrow, though not much accumulation is expected. That being said, it will still slow down travel and reduce visibility at times. Heading west, south or east will be fine, but heavier amounts of snow are expected in Central and Northern Michigan. -- Greg

Tuesday 3:00 PM Update: Winter storm warnings have been posted for much of the northeast as a nor'easter is set to dump up to a foot of snow in the mountains and bring snow, rain and sleet to the eastern seaboard. This would cause travel impacts for Boston, New York and Philadelphia and likely slow air travel. The snow starts to fall Wednesday morning, but peak impacts will be felt Wednesday afternoon and evening. -- Tom

We are approaching the busiest travel season of the year, and conditions across Michiana will be pretty good today and tomorrow. Here is a breakdown of what you can expect over the next three days if you are staying in the Midwest, or if you are headed anywhere else across the country.

Tuesday: Travel away from Michiana to the west, south and east looks to be smooth sailing if you are staying within a four or five hour drive from home. Nationally, the far Pacific Northwest and the East Coast are trouble areas today with snow likely in both locations. Your best bet is to call ahead or check online to make sure flights to your destination are on time.

Wednesday: This day will already be a slower go of it thanks to the sheer volume of traffic on the roads. Driving within a few hours of Michiana will be decent, we are in the moderate category for travel thanks to some light afternoon snow showers and very cold temperatures. The situation in the far Midwest and Great Plains isn't ideal for driving. Accumulating snow is in the forecast which will make driving rough and could cause flight delays within in the snow band. Once again, the East Coast, especially the far upper East Coast, will be a problem spot. Cities such as New York, Boston, Baltimore and Washington D.C. will all be reeling from a winter storm. Flight cancellations are a definite possibility, so once again, check ahead!