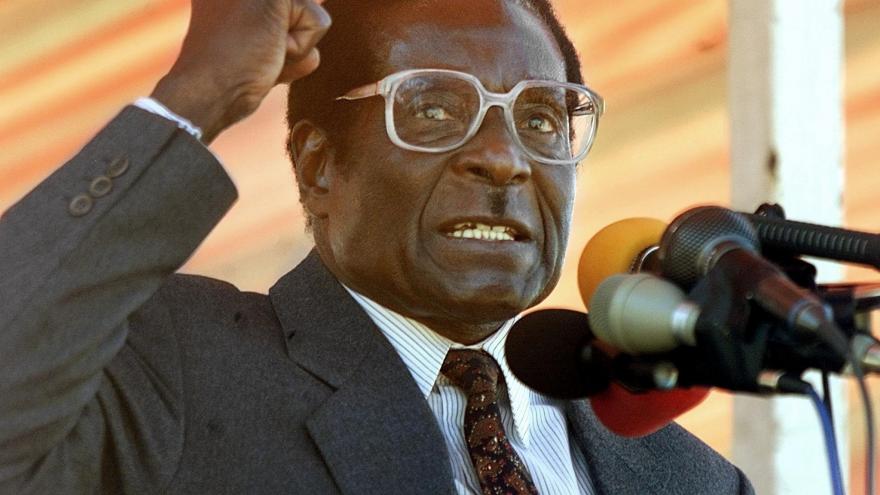 (CNN) -- He's ruled Zimbabwe with an iron first for almost four decades straight, but it took just 10 days for Robert Mugabe to see his invincibility crumble.

Zimbabwe's military has put the 93-year-old veteran leader under house arrest and taken control of the capital and its key sites, in what appears to be a coup to end his long rule.

But those apparently behind the attempt to oust Mugabe are not supporters of Mugabe's opposition -- they are largely longtime allies of the President who have been in a years-long bitter dispute over who will one day replace him.

Ten days ago, Mugabe fired the powerful Vice President Emmerson Mnangagwa, who was widely tipped to become the country's next leader. The decision shocked the nation for its timing, just ahead of next year's presidential vote.

The vice president's dismissal fueled speculation that Mugabe was looking to clear the path for his wife, Grace Mugabe, to take over in the event of his retirement or death.

The decision also set off a chain of events within Mugabe's own party, which came to a head on Wednesday when a military spokesman announced on state television that it had launched an operation to target "criminals" close to the President who were causing "social and economic suffering."

At the same time, armed troops and tanks rolled through the capital, Harare, as the army seized control of the city's key sites.

Mugabe's move was the final affront to powerful officials in the ruling ZANU-PF party, many of whom were backing Mnangagwa.

Zimbabwean media have reported on increasingly open animosity between Mnangagwa and Grace Mugabe, a divisive figure.

David Coltart, a former Cabinet minister, said that Robert Mugabe was known for cutting ties with allies, but that his decision to fire Mnangagwa was the final straw.

"Mugabe, for all his faults, has shown amazing political acumen over the years," Coltart said. "But this is a foolish move."

Much of the animosity towards Grace Mugabe, 52, stems from her position as an outsider, detached from Zimbabwe's old guard of independence leaders, a clique that her husband and his senior officials were drawn from.

She has been accused of extravagance -- her lavish shopping trips have earned her the moniker "Gucci Grace" -- and her crude political maneuvering has made her a polarizing figure.

The first lady became head of the ruling party's women's league a few years ago, prompting speculation that she would be her husband's successor.

She's also received plenty of bad press, including for her alleged violent assault of a South African model in Johannesburg this year. She denied the charges, but was granted diplomatic immunity before she could make a court appearance.

But she has her supporters, too, gaining traction with a younger Zimbabwean school of politicians who have no ties to the country's independence fight. A youth wing of the ruling Zanu PF party on Tuesday vowed to fight for both Robert and Grace Mugabe.

As the military seized control of Harare on Wednesday, Mugabe was placed under house arrest and Mnangagwa's whereabouts remained unknown. He has been in hiding since being sacked last week, raising speculation he was plotting to oust Mugabe.

Whether or not he will take the reins is yet to be seen.

In a statement issued by a government spokesman, Mugabe accused the vice president of "disloyalty, disrespect, deceitfulness and unreliability" as he dismissed him.

But Mnangagwa is no fresh-faced opposition figure looking to upend status quo. He is nicknamed "Crocodile" because he too has an extraordinary political longevity that traces back to the days of Zimbabwe's independence fight.

He served as Mugabe's right-hand man for decades, first as assistant during the independence struggle and later as his intelligence chief and cabinet minister.

Like Mugabe, Mnangagwa has been accused of playing a central role in a string of massacres by the country's Fifth Brigade in 1983, which are widely believed to have left up to 20,000 people dead. Most of those who died supported Mugabe's opposition at the time, and the killings were seen as a brutal and barbaric way of consolidating the Mugabe government's power.

Mugabe's 37-year rule of Zimbabwe has seen periods of bloody brutality. He rose to power as the country's first prime minister in 1980, when Zimbabwe was established out of the former British colony of Rhodesia.

Under his leadership, Zimbabwe's economic prosperity dwindled. A program of land seizures from white farmers had serious economic and social impacts. Hyper-inflation set in, and the country was forced to dump its currency and adopt the US dollar.

More recently, the government has been unable to allay the effects of an extended drought, which has led to serious food shortages for millions.

Mugabe has clung onto power for longer than any other African leader, and is the world's oldest head of state. Despite repeated accusations that he presided over rigged elections, for a period he was forced to share power with the opposition Movement for Democratic Change, headed by the country's best-known opposition figure, Morgan Tsvangirai.

Mugabe had said he planned to contest the 2018 presidential election, infamously claiming that "only God" could remove him from office.

Like Grace Mugabe, the President is criticized for his lavish lifestyle. Last year, he threw an extravagant birthday party in a region hit by food shortages and drought, spending a reported $800,000 on the affair.