The Brick already booking parties in 2015 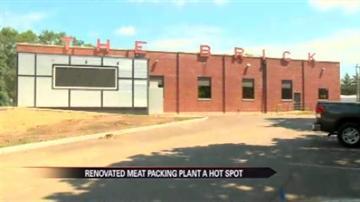 SOUTH BEND, Ind.--Corey Cressy and his wife Becky took a business leap of faith: investing in the old Ekrich meat packing factory and turning it into this.

"The prices of real estate went down so I was telling people, if you ever had an idea now's a good time," said Corey Cressy, owner, The Brick.

Cressy took his own advice and opened "The Brick"- an industrial, hip venue space that can fit more than three hundred guests.

"This is like the ultimate wedding spot, but we don't just do weddings," said Becky Cressy, owner.

The bottle caps mark the days already taken. Graduation parties, receptions, family reunions, trivia nights, baby showers-- you name it and the space is yours.

"We even had a wake party here, like an after-funeral. Like a let's just have an Irish wake and enjoy ourselves party."

Crews are still working on the front porch and lawn. but the piles of dirt seem to attract the curious passerby.

"The contractors became pretty good tour guides," said Corey Cressy. "They got used to the knocks on the windows and to give a tour."

The owners say it fills a specific niche in the market. A space to make your own.

"There's a lot of gorgeous spaces in town for receptions. They're so beautiful though its like I didn't feel I could put my own spin on them," said Becky Cressy.
They planned to spend this year putting on the finishing touches, but it's taken off without any advertising or marketing whatsoever.
"We just haven't had any time for that because there's been so much foot traffic, we haven't been able to get in ourselves to take pictures," said Becky Cressy.
Share this article: