The conflict in Syria could take a deadly turn 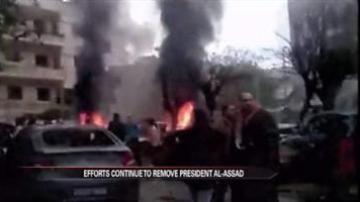 40,000 lives have been lost in the bloody conflict in Syria and now there are global concerns that the situation there could take an even more deadly turn.

Opposition forces are gaining ground in the capital city and the Syrian Military threatened to use deadly nerve gas.

Secretary of State Hillary Clinton is working for a diplomatic solution to prevent the tragedy from unfolding.

Syrian officials deny they would use chemical weapons on their own people.

"First and foremost, the violence must stop. Then the political dialogue must start, as soon as possible," said Clinton. "No-one should have any illusions about hard this remains."

The question of how the US Military would handle this potential disaster remains. A ground operation to secure the weapons could take about 75,000 troops.