The end of an era: smoke free South Bend emerges in 2017, many are not happy 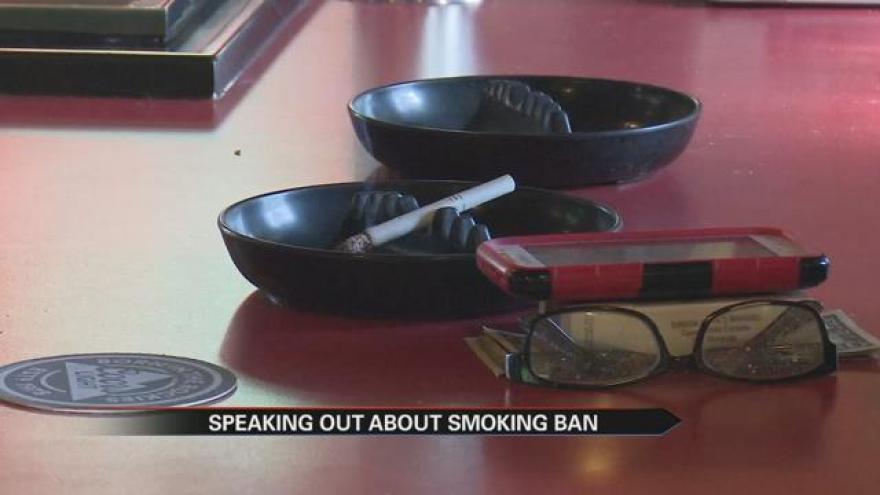 Starting Monday, smokers in South Bend will have to light up outside, 15 feet from any building. And many are not happy. As 2016 comes to an end, South Bend residents are voicing their opinions.

"I don't like this new law at all," says Murphy's Backyard Pub owner Michael Jolly.  He's owned the bar for 20 years, and it has always been a home for those that like to light up.

That will all change January 2, as South Bend's smoke free ordinance goes into effect.

Kimberly McFarland is a bartender at Murphy's.

"I think it should be up to the bar owner to decide if it's nonsmoking," says McFarland. "People that don't like to smoke, there are other places to go. But I don't think it's right."

She's not the only one against the ordinance.

"To me, I think they're taking my rights away from me. Everybody has rights," says Jim Austin, a frequent customer.

He's loyal to Murphy's, but come Monday, his resolution to stay put, may not stick.

"I'll go to Mishawaka," Austin says. "With a couple of the guys, you know. We might come here for a little while, then head over there and smoke."

And that's exactly what Jolly is afraid of.

"They're going to go across the street to Mishawaka. I'm right here pretty much on the city line with Mishawaka," Jolly explains. "I'm pretty sure my patrons will go to Mishawaka bars, where they can go grab a drink and smoke at the same time."

The financial repercussions of the ban, are daunting. Many are concerned with the local, small businesses that may suffer once the ordinance goes into effect.

"South Bend has put every establishment at a competitive disadvantage with the rest of the county," says customer and Murphy's bartender, Tony Blasko. "By passing this on their own, rather than waiting until the St. Joseph County Council passes it itself, so there's an even playing field for everyone."

A new year, a new ordinance, but the same old frustrations for those who enjoy a puff at their local pub.

"If they want the city to thrive, they can't keep taking people's rights away," says Austin.

"Obviously, I guess I'll have to obey it," adds Blasko. "But if I do feel like smoking, I'll go to Mishawaka and light my cigarette there."

But not everyone feels the same way.  Although the ordinance was made to prevent people from secondhand smoke, many non-smokers do choose to go to smoking establishments.

Chet Bukowksi goes to Murphy's often.  The smoking law doesn't effect him, but he does feel that it is a good change for the new year.

"It's asking us to be in favor of a law that's for public health," Bukowksi explains.

Bukowksi is a former smoker, and says the new ruling is only forcing establishments to become smoke-free indoors.

"But you can still smoke outside," he adds. "It's called a parking lot."