The end of Twinkies? 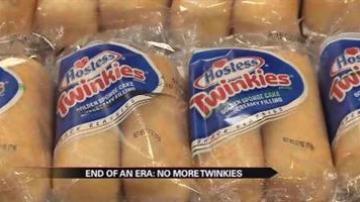 Twinkies are rumored to last forever but the company that makes them may not. Hostess Brands wants to close and sell off its iconic brands, so ABC57 set out to find fans trying to get their hands on some of the treats before they’re gone.

Hostess Brands asked a court for permission to close its business and sell off its brands.

Bakery operations are suspended, but the company's retail stores will remain open for a few days to sell products still on the shelves.

Hostess says it will immediately lay off most of its 18,000 workers after a week long strike by the baker’s union which was protesting pay and pension cuts.

“It’s the end of an era. We grew up with it. Hostess Twinkies.  This is iconic,” said Terry Ryan.

Ever wonder how they get that creamy filling into the middle of a Twinkies cake?

“It was like an American Heritage. You know, that’s what we all grew up on when we were kids,” said Paul Dreesen.

“My kids really look forward to all the Hostess treats, and they were freaking out this morning.  So I told them I would stockpile for the hostess apocalypse,” said Jennifer Bearickx.