The 'Fiscal Cliff': Local experts says it could mean a smaller paycheck Jan. 1 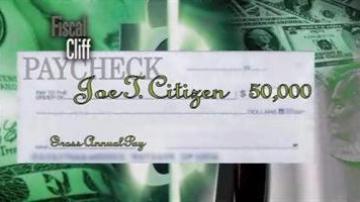 SOUTH BEND, Ind. -- There are still no signs of progress on the "fiscal cliff".

Republicans sent their proposals for deficit reduction to the White House Monday, but President Obama said there will not be a deal uuntil GOP lawmakers agree to raise taxes for the wealthy.

The 'fiscal cliff' deadline is Dec. 31, but Congress is set to go on holiday break next week.

We keep hearing about the "fiscal cliff", but how does it affect you? Is it really something you need to be concerned about?

ABC 57 set out to answer that question and what we found out may surprise you. A local expert said if Washington does not reach an agreement ffamilies could see a dent in their first 2013 paycheck.

There is a big misconception that the ''fiscal cliff'' will only affect the wealthy. The reality, however, is that it is only true for certain proposed tax increases.

Experts said folks need to pay close attention to the 2 percent increases the country could see in payroll and income taxes. It's something we all get taken out of every paycheck.

"It will definitely affect us, we are in the last 10 years of planning for retirement," said South Bend resident Richard Declercq.

The concerns for the ''fiscal cliff'' are felt well beyond the White House, to families right here in Michiana.

So, what does it all mean for you?

The end of tax cuts for families and the beginning of government spending cuts all boils down to a smaller paycheck in a matter of weeks.

"They'll have less money in their paycheck. They will have a little bit less because of income tax with holdings and because of the payroll tax," said Rick Clayborn with Accutix Computer Tax Service in Elkhart.

Clayborn said the payroll tax and income tax will increase by two percent. So for example, a $50,000 salary would decrease by $2,000. That is roughly $80 less a paycheck.

That is not all, though. Clayborn said the spending cuts will be even more damaging to communities like ours.

"If we go past the beginning of the year and this doesn't get resolved people will start losing their jobs. It won't happen immediately, but it will happen."

Nearly 1,000 government programs will see deep cuts and less government spending, which equals less money put back into the economy. That, will in turn, eliminate jobs.

On top of that,  seniors could be the first to feel the financial crunch.

"If they touch what they call the entitlement, which is social security, medicare and medicaid. If they touch those, folks on those programs will be affected immediately," said Clayborn.

While Washington remains in a stale mate, residents in South Bend are ready for a resolution.

"At some point you have to make the dramatic cuts, without raising taxes and see if you can run a country based on what's left," said Gary Weaver.

"I think what you need to do is come together and compromise," agreed Declercq.

Declerq is taking steps to help and urges others to do the same. He reached out to all 10 of his local representatives urging them to find a resolution.

The deadline is Jan. 1, but Congress is scheduled to go out of session on the 14 and the newly elected congress will not be sworn in until Jan. 3.