The Food Bank of Elkhart County set to close their doors 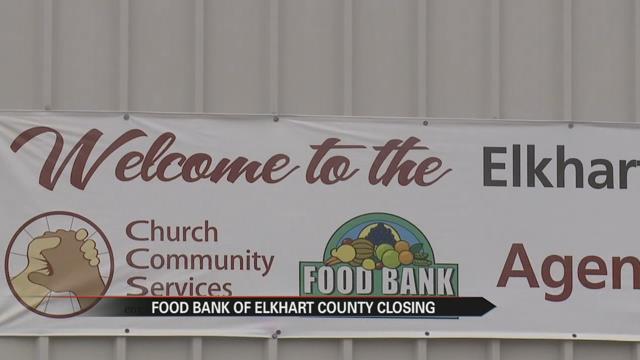 The Food Bank of Elkhart County located at Church Community Services in Elkhart will be closing its doors next month. It is a sublet of the Food Bank of Northern Indiana which is located in South Bend.

These new changes mean the 57 agencies it serves are going to have to make major adjustments on limited budgets.

The Food Bank of Elkhart has grown to provide almost two million pounds of food for kitchens and food pantries throughout Elkhart County.

“I know it has been reaching a lot of people. A lot of agencies are able to run and keep operating because of us being here in this location,” said Alexander Williams Director of the Food Bank of Elkhart County.

Williams has been with the food bank since it opened in the spring of 2013. It will close its doors July 24.

“It's tough to say we have to have an end to our food bank,” says Williams.

This end has many who help serve food to the needy in Elkhart County talking.

“It has been really nice the last few years. They have been the food bank for us because ya know they will call us and maybe have perishables or close dated stuff and we just drive over and get it,” says Ross Swihart, Executive Director of Faith Mission.

Swihart says the food bank at CCS provides fresh produce and convenience even for a big soup kitchen like theirs which serves about 600 meals a day.

“For some of the smaller pantries and the smaller entities in Elkhart County that have been accessing the food bank that are using volunteers and don't have the resources that the mission has, I feel for them because it's probably more of a struggle for them,” says Swihart.

Judy Hyatte-Howie, kitchen manager of Susanna's Soup Kitchen, says the Food Bank of Elkhart County has been a saving grace.

“There are times we were really low on funds and if it hadn't been for the food bank being here and me being able to shop there we may not even be in existence,” says Hyatte-Howie.

The most an agency will pay for food at CCS is $.18 a pound. Without that deal, Hyatte-Howie is unsure of the future.

“We are on a very limited income, or budget,” explains Hyatte-Howie.

Now Susanna's Soup Kitchen will have to travel to the food bank in South Bend in order to serve fresh produce.

“This kitchen runs purely on volunteers and you can't expect volunteers to drive all the way over there and maybe not even have anything when they get there,” says Hyatte-Howie.

Directors at the Food Bank of Northern Indiana say this decision has nothing to do with CCS's performance. It is simply a business decision.