The Great Conjunction: Saturn and Jupiter shine together this month

NOW: The Great Conjunction: Saturn and Jupiter shine together this month

On December 21, the planets Saturn and Jupiter will appear to be in the same spot in the night sky and seem to shine as one brilliant light.

According to EarthSky, a conjunction is when any two objects in space pass each other. This specific conjunction is "great" because it is the meeting of the two biggest planets.

How does this happen? Jupiter has a shorter orbit around the sun than Saturn. Because of this, roughly every 20 years, the planets appear to pass each other in space. The two planets might seem close together, but in actuality, Saturn is about two times farther away from Earth than Jupiter.

In this image by Pete Lawrence, you can see Saturn and Jupiter creeping closer and closer together. Starting now, you can look in the night sky and see the planets in close proximity. 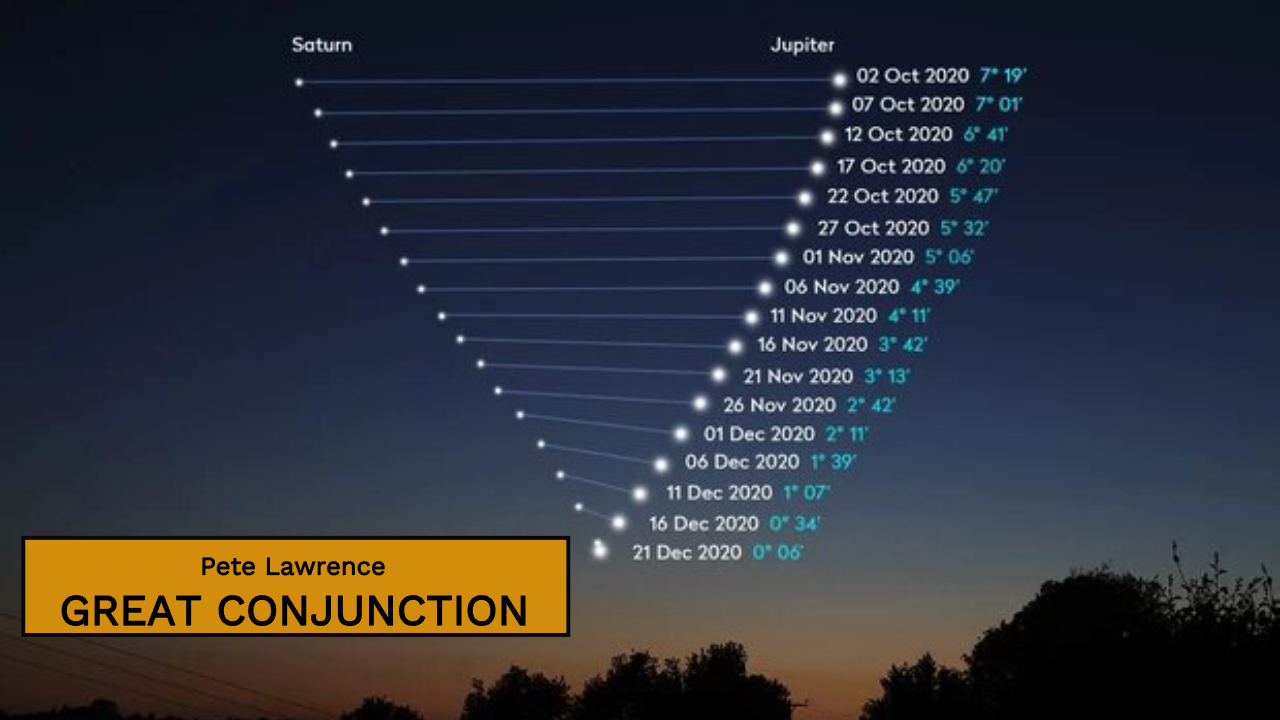 The orbits of Saturn and Jupiter will eventually overlap by December 21 Background photo: Pete Lawrence

Here's a few tips for identifying the planets. Jupiter will shine most brilliantly in the sky, while Saturn has a golden yellow tint to it. Stars will twinkle in the night sky, while planets shine continuously. 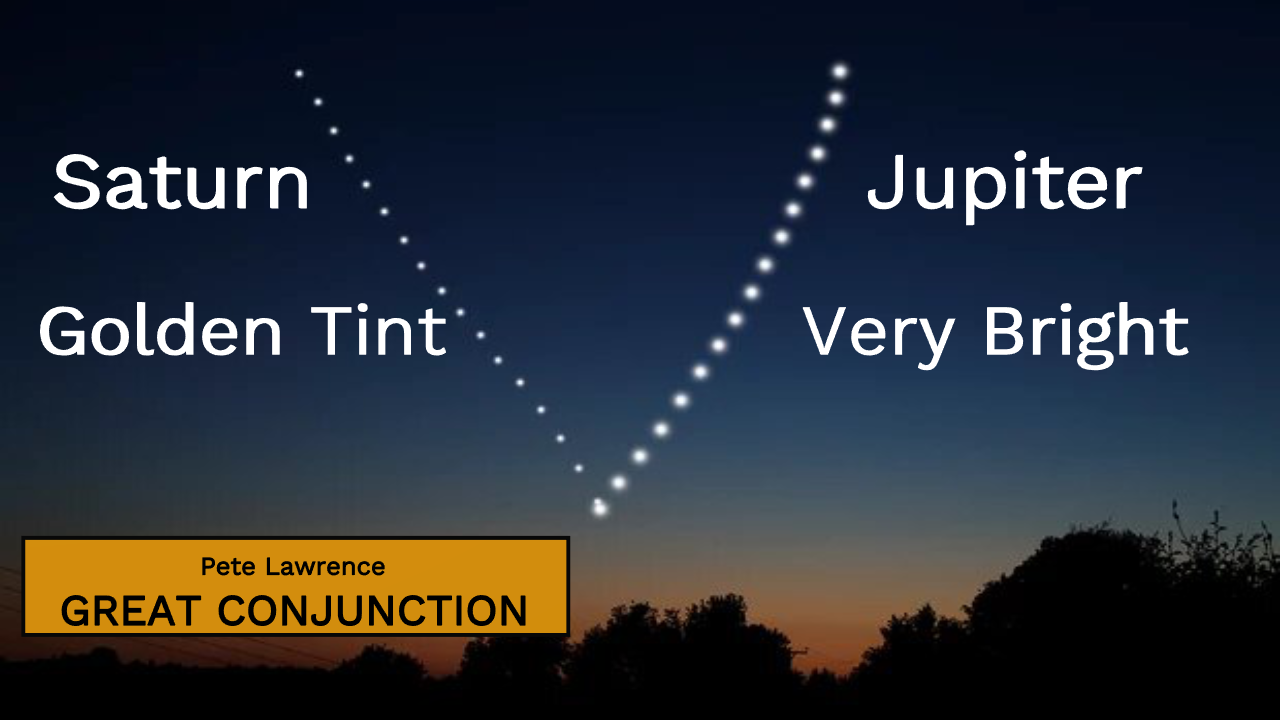 Saturn and Jupiter are both bright, but you can still tell them apart. Look for the yellow, gold tint of Saturn. Jupiter will shine brighter than anything around it. Background photo: Pete Lawrence

These two planets continue moving closer until December 21, when the overlap occurs. Coincidentally, this date is the winter solstice. You may have heard people refer to this conjunction as the "Christmas Star," because it will shine so brilliantly just days before the Christmas holiday. This is a nod to the Star of Bethlehem from the Bible.

While this event technically happens every 20 years, this year it will be unique. This is the closest conjunction (planets appear closest together) since 1623. That year however, the conjunction happened close to the sun, so it was not actually visible to people. The last time we had this close of a conjunction (that people could actually see) was all the way back in 1226. It's safe to say this year's occurrence will be a once in a lifetime viewing opportunity.

When looking for the planets, stand in an open area, like a field. The planets can be seen looking southwest. As we get closer to December 21, the planets will appear lower on the horizon, so you don't need to look very high into the sky.

This week we have mostly clear skies on Wednesday and Thursday nights. Although you won't see the actual conjunction just yet, you can still take advantage of this weather and see the planets in close proximity. Our fingers are crossed for no clouds the night of December 21! 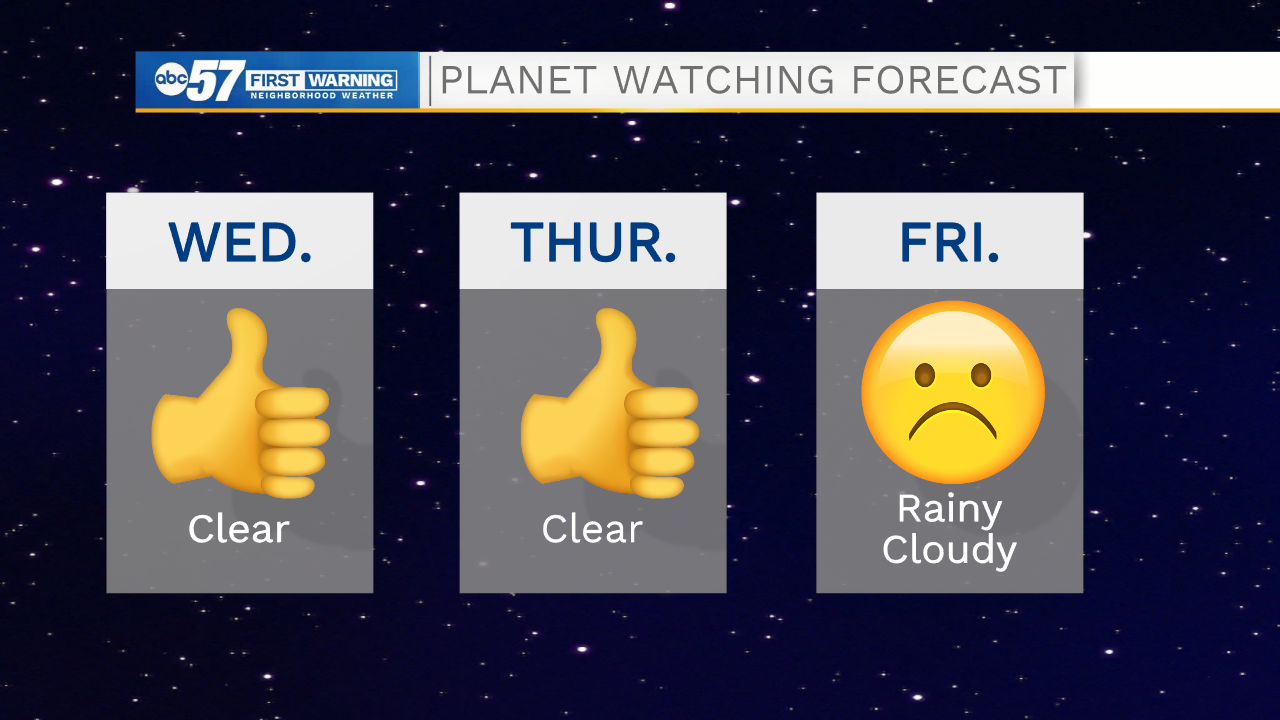