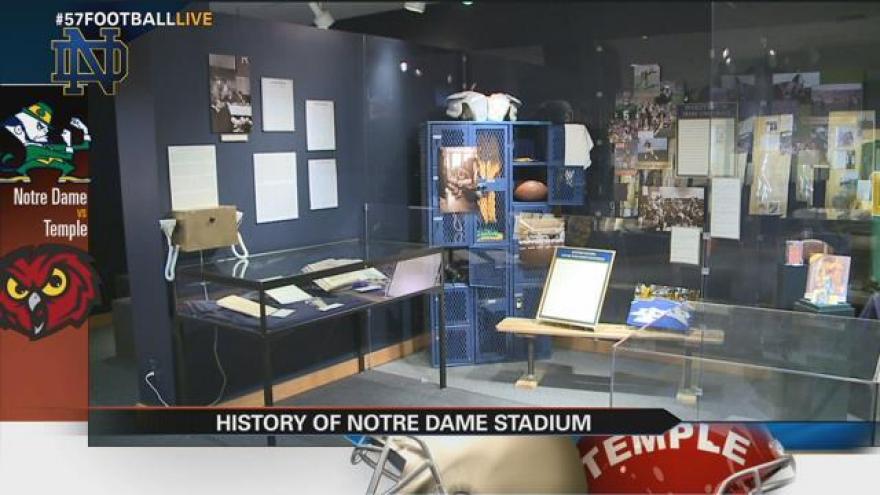 During every home football game, 80,000 fans flood into Notre Dame Stadium. The stadium was just a field until Knute Rockne inspired the school to build something great.

The history of the stadium begins in 1917 when Knute Rockne accepted a coaching position at Notre Dame.

Over the next 13 years, the team won 105 games, tied 5 and lost 12. They also won three national championships.

There was just one small problem, the team was still playing on one small field, just north of where today's stadium stands.

Rockne-was determined to build a stadium as prestigious as his football team.

The History Museum in South Bend has an exhibit through August 6, 2016 called The House that Rockne Built: Notre Dame Stadium.

The exhibit includes original drawings of the stadium, signed off by the legendary coach.

One fact may surprise Irish fans.

"The stadium is a smaller version of the University of Michigan stadium," said Brandon Anderson - Deputy Executive  Director, The History Museum.

Throughout the years, much has changed.

The Irish, now known for its green, gold, and navy uniforms, once sported yellow, red, white and blue.

And instead of catching the game next to JFK and President Nixon you may spot Taylor Swift and Selena Gomez.

After undergoing its first renovation during the 1996-1997 season, the stadium is expanding yet again.

"It's a household name at least in the Indiana area and for fans of Notre Dame across the world," said Anderson.

The House that Rockne Built: Notre Dame Stadium is on display now at The History Museum. You can tour the exhibit until August of next year.