The impact of violence on children 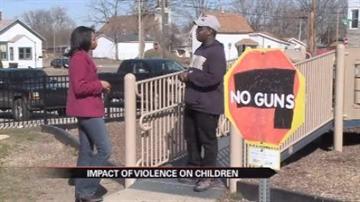 SOUTH BEND, Ind. -- More than 100 people have been charged for shootings in South Bend over the past year. ABC57 sat down with some of the youngest victims to see the violence through their eyes.

There are certain sights and sounds you hear in neighborhoods filled with children.

In early April, a different kind of sound echoed through the streets causing a chilling feeling of despair.

"I don't want to really be outside anymore that much,” said Ivan Mata of South Bend. “It could happen any day now. I might be outside and they could shoot me."

On Sunday, April 7th at 3 in the morning on Albert Street in South Bend, police say a man was shot in the leg during a drive-by shooting.

The shooting happened a block away from where he and his brothers play – an area they call home.

There's no telling how many shootings actually happened in 2012 and so far in 2013, but we do know there have been charges filed against 119 people who pulled the trigger within the city limits of South Bend.

In South Bend, 43 people were taken to the hospital after being shot.

There are the obvious victims, those who were shot.

And then there are those victims we rarely hear about, our children who are left to live in fear.

"One time I was at a party, everyone was dancing and then there was shooting. My heart was like going, I ran up out of there,” said Keemo Richardson.

He has heard gunfire while lying in bed in his west side home.

"My mom told me he got shot. And I'm like what? Nah. That ain’t [sic] possible,” said Richardson.

Some say survival is the name of the game in parts of South Bend.

ABC 57 spoke with South Bend's new Chief of Police Ron Teachman about a road traveled far too often for some area kids.

One filled with angst, littered with bullet casings and wrapped in crime scene tape.

"South Bend is still a very safe community. I hope parents are not in fear,” said Teachman.

"So they can give them that sense of assurance that we're there for them. And to provide for their safety both during school hours and after school as well,” said Teachman.