'The pieces were all there' during Notre Dame's first fall practice 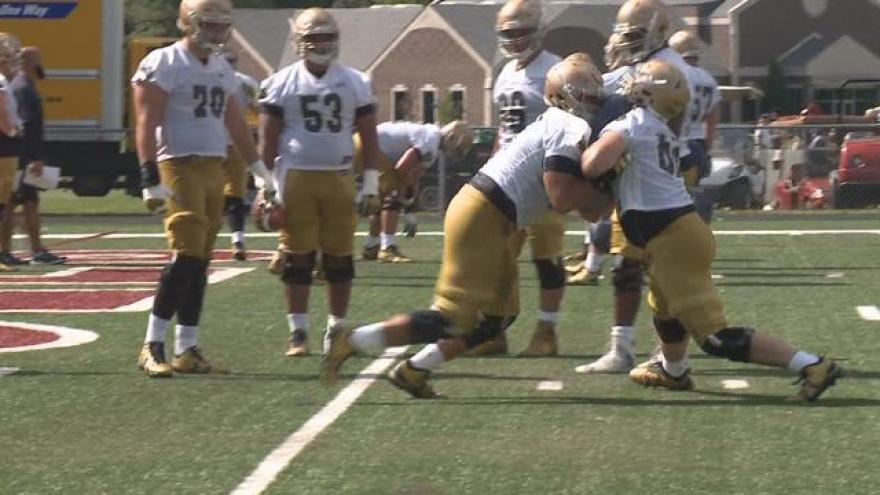 Today the Fighting Irish took their first step towards their ultimate goal winning a championship.

The Irish open fall training camp with the first of 5 practices here at Culver Military Academy. It's an opportunity for coaches to capture the players full attention without the distraction of campus.

"It gets them really focused on just football, they don't have to think about Notre Dame and all that goes with the rigors of Notre Dame at times. It's really just a break mentally almost,” said Head Coach Brian Kelly.

"It's amazing to come out here and see what we can do...put all that stuff together...you know we all know what it's like to play football but we need to be better mental players and I think with this first day we did a good job improving on that so the next few days we're going to try to improve further on that,” said Josh Adams, Notre Dame sophomore Runningback.

It was the first glimpse of the players on the field and the quarterback competition was on display between DeShone Kizer and Malik Zaire.

Kelly explained the balance of reps with the quarterbacks and his assessment of them at practice.

"It's pretty much what we thought, they are a little bit different in what we want to do with them and that continues.  You know we saw Malik on a break down throw a great ball over the middle off of a broken play.  And Kizer dumped the ball down off of his third check so they continue to be who we thought they would be, so I think we just continue to plow forward and continue to keep them sharp,” said Kelly.

While Kelly says there is no time table on naming the starting QB, he has expressed urgency in developing the receivers.

"I think the pieces are there but it's going to take some time, but there's enough talent there for us to be successful there with the group that we have,” said Kelly.

Camp is also about developing team chemistry and some guys got a little creative with that task.

"We thought we'd try to do something to bring us together kind of thing. You know so you can look at someone and say oh yeah that's a tight end. And we also thought we'd try something that made us look good as well. So, you know, I think we're obviously pulling that off,” said Durham Smythe, a Notre Dame Tight End.

And while he nailed that, we asked him who he thought has the best ‘stache.

"You know that's tough, obviously from just an appearance standpoint I have to go with myself, but Wisher brought out the fumanchu so that's tough to beat as well...so it's close,” said Smythe.