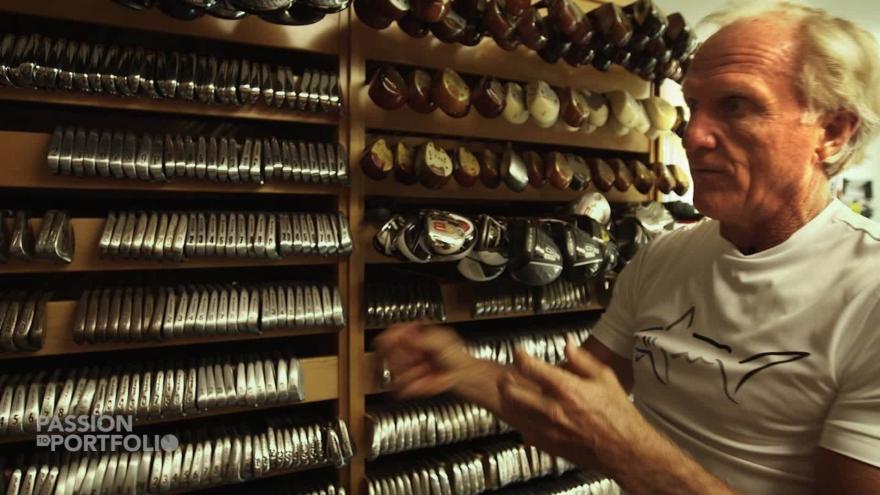 (CNN) -- It's hard to imagine any of today's top professional golfers hunkered in a workshop making their own golf clubs.

Rewind a couple of decades though and that's exactly what former world no.1 Greg Norman used to do, before he headed out to compete on the PGA Tour.

"I used to hand make all my equipment, assemble my shafts, weigh up my grips, get the spine angles of my shafts exactly the same for every iron shot so you get absolute consistency with performance of your shaft," the 62-year-old Norman told CNN Sport over the phone earlier this month from his office in West Palm Beach, Florida.

With that in mind, you can perhaps understand why Norman was baffled by the recent revelation that US Ryder Cup star Patrick Reed had failed to notice he'd been playing with the wrong club set-up.

Reed's approach-play statistics had taken a dramatic dip before he eventually discovered that his irons had been off by as much as 2 to 2.5 degrees, something Norman believes would never have happened to him or his contemporaries.

"We knew our games so well, we knew our equipment so well," said Norman.

"Then today you read about stuff like Patrick Reed. How the hell can you take a brand new set of golf clubs out on to the course without even knowing that the lie angle was bad, the divots, the ball flight or anything.

"That blows my mind and he's a top player."

Today's pros hit the ball further than ever before but Norman is also "amazed" how poor some of them are at the shorter stuff.

Nicknamed "The Great White Shark," Norman was known for his aggressive, big hitting style during the 1980s and 1990s, but it was his consistency that kept him top of the sport for so long.

And it's that consistency which the Australian feels is lacking among the current crop of professionals, especially when it comes to their short game.

"If you look at today's top players, their distance control inside 150 yards with a wedge is quite amazingly poor," he said.

"These guys are 20 feet short, 30 feet left, 20 feet long, their distance control is not consistent. It could just be the way they play -- when it works, it works and when it doesn't, it doesn't.

"In our era, every time you'd put a pitching wedge in your hand, if you didn't think you'd get the ball inside 10 feet every time, or seven out of 10 times, you weren't having any control over your golf game."

While the distances being achieved in the men's game are impressive, when it comes to accuracy, they are being outdone by their female counterparts on the LGPA Tour.

Last season, 86 women hit more fairways off the tee than the leading PGA Tour player, Ryan Armour, who hit 72.73%. Lexi Thompson was the leading woman with a remarkable 86.7%.

Thompson also led the way with approach shots, hitting 77.7% of greens hit regulation, and there were 32 women altogether ahead of the top performing male player, Martin Flores, who hit 70.64%.

"It's not just about how far you hit it, you have to get the ball in the hole," former women's No.1 Annika Sorenstam told CNN's Living Golf in October.

"It's consistency, a lot of people think that watching a lady swing is something they can relate more than to one of these long hitters where it's just something we cannot achieve, but women show more long swinging, tempo like swings that amateurs can relate to."

No one can accuse Norman in his prime of inconsistency. The two-time Open Champion won 21 times overall on the PGA Tour, though he's almost more famous for his 31 runner-up finishes, including eight times at major championships.

He always put himself in contention, and a 2014 study by Golf Digest found that, since 1980, Norman was a better player week in and week out than everyone except Tiger Woods.

Indeed, Woods is the only player to have spent longer than Norman at the top of the world rankings -- the Australian was No.1 for 331 weeks compared to Tiger's staggering record of 683 weeks.

"In Tiger's era, my era, Jack Nicklaus' era, consistency really was the key, consistently putting yourself in a position to do it," said Norman, who won the 1986 Open at Turnberry and at Royal St George's in 1993.

"That meant understanding your game and how you want to get around from point A to point B."

Woods himself recently spoke about his frustration at watching the "mental mistakes" of the younger generation managing their way around the golf course, specifically at this year's Presidents Cup where he was a US vice captain.

The 14-time major winner said he saw six players make the same error at the par-three 10th hole at Liberty National, failing to take account of the wind and placing the ball in the wrong position on the tee box.

"It's simple. Move it over to the right side, fire it into the wind so a bad shot ends up in the center of the green, not off to the right or in the bunker.

"It's little things like that which are very simple that you can correct, but I just don't think these players have been taught that."

'Roll back' the golf ball

In that same interview, Woods also called on the sport's governing bodies to "roll back" the distance that the golf ball can travel because the pros are hitting it too far, warning that 8,000-yard courses are "not too far away" if technology keeps progressing the way it is.

Norman agrees, but told CNN that he and Jack Nicklaus have been saying the same thing since multilayer balls hit the market in 1996 and the "distance revolution" began.

John Daly was the first player on the PGA Tour to record a driving average of more than 300 yards in 1997. Fast forward two decades and 43 players averaged 300 yards or above in the 2016/17 season, with Rory McIlroy top of the pile with a 317.2 yard average.

"What Tiger is saying today is no different to what we said 20 years ago," said Norman who would like to see pros restricted to 300 yards, including carry.

"He is seeing it more now because he's probably being out driven by 20 yards by some of these young players now.

"The skillful part of the game will come to the fore more but, more importantly, it's about the building of sustainable golf courses. When you build a course for a PGA Tour event once a year, the cost of maintaining it for the rest of the year is just ridiculous.

Augusta National, the home of The Masters, set about "Tiger proofing" its course after the big-hitting Woods grabbed the world's attention with a 12-shot victory in the 1997 Masters, finishing 18-under par for the tournament.

They extended the layout by more than 500 yards and they're not finished yet. Earlier this year, Augusta bought land off a neighboring golf club with a view to extending the iconic par-five 13th hole, which currently stands at 510 yards.

"I remember the eighth hole at Augusta was nearly impossible to reach in two and now these guys are hitting irons in there," said Norman who finished second three times at The Masters, perhaps most notably in 1996 when he blew a six-shot lead and Nick Faldo took the green jacket.

"Augusta can't lengthen itself anymore, but the tech is going to allow these players to keep hitting it longer year after year.

"If they sent out an invitation to the players and said 'you're going to use a gutter percha ball and a hickory shafted golf club, go get them worked out, practice before you get there, the best player will still win that week.

"The best players have that ability to make that adjustment no matter what they're using."

Norman may want the professionals to be restricted but he's an advocate for technology delivering a better experience for the everyday player, whether it's balls, irons, drivers or even golf carts.

In October, he launched "Shark Experience," a multimedia platform that allows golfers to stream music, live sports action, news bulletins, entertainment and even Greg Norman golf lessons straight to their carts while out on the course.

The technology will continue to evolve over time as more features become available -- just like updates on a smart phone.

"Every time you walk into a hotel you have a TV that's connected to everything -- music, kids games, movies, anything you want -- and I thought why can't we do this on a screen on every golf cart?" said Norman, whose company operates in many areas including golf course design, clothing, award-winning wine and even his own line of steak and beef products.

"You have a choice about playing whatever music you want from Frank Sinatra to heavy metal. All the things that players have been taking independently to the golf course are now integrated."

Norman insists the "Shark Experience" won't impinge on the enjoyment of those golfers who play the game to get away from screens, noise and the daily grind.

"We've built speakers into the roof of the golf cart, and it's ergonomically designed where the sound goes in but not out. You can walk 15 meters from the golf cart and you can hardly hear the music," Norman explains.