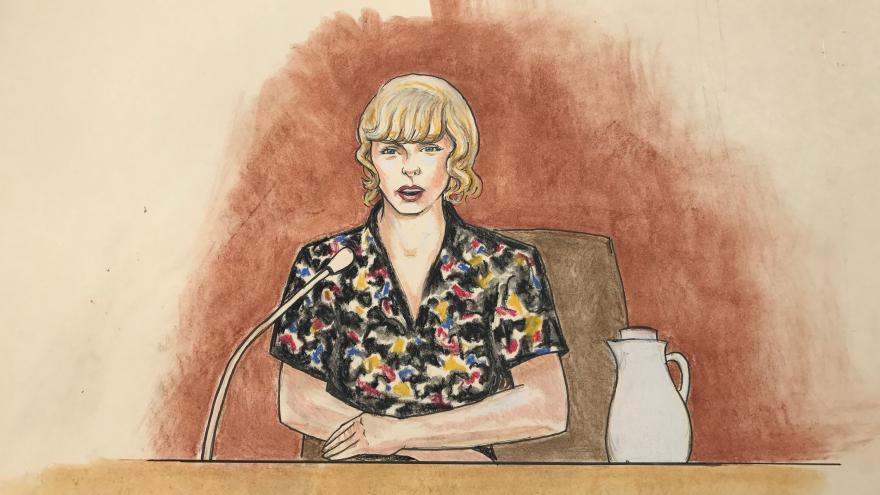 (CNN) -- There are no cameras allowed in the federal courtroom where singer Taylor Swift is fighting a legal battle against a DJ she says groped her during a press event in 2013. However, reports of her testimony are colorful enough, and court sketches show a determined Swift, backed up by her mother and legal team.

Taylor Swift claims David Mueller, who was a radio DJ in Denver at the time of the incident, lifted up her skirt and groped her bare bottom during a photo op. "What Mr. Mueller did was very intentional," Swift said during her testimony on Thursday.

David Mueller claims he didn't touch Swift inappropriately. In fact, it was Mueller who initially sued Swift and her family in 2015, saying her accusations had ruined his career.

Mueller's lawyer asked Swift why the front of her skirt didn't appear to be lifted. "Because my ass is located in the back of my body," Swift said.

Swift's mother, Andrea Swift, has been by her side during the trial. She testified that Swift told her about the groping shortly after it happened. "I wanted to vomit and cry at the same time," she said.

Swift has been in the courtroom every day of the trial, and her lawsuit states that Swift hopes her presence and participation will "serve as an example to other women who may resist publicly reliving similar outrageous and humiliating acts."