The Vine absent from Wine Walk 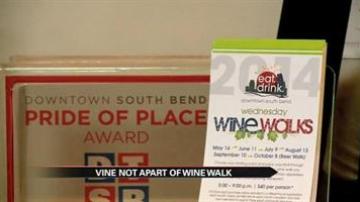 SOUTH BEND, Ind. -- Downtown South Bend held its first Wine Walk of the spring and summer season, but one restaurant was noticeably absent from those that participate every year.  The Vine was taken off the event list.

According to city officials, The Vine was supposed to participate in Wednesday's event, until the recent controversy with the restuarant not paying back rent.

City officials say there is plenty of interest in businesses wanting to step in.

"I don't know that we're looking for a type of restaurant but there is a lot of interest in that space," says Cathy Dietz of Downtown South Bend.

The Vine will close it's doors for good on Sunday after business hours, according to the general manager.