The week that Obama and Biden cried 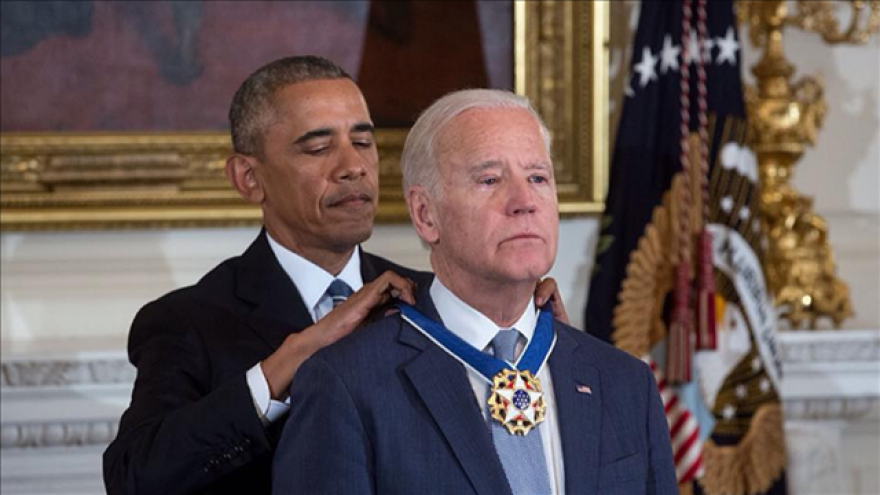 Editor's note: Rabbi Shai Held, a leading Jewish theologian and educator, is co-founder and dean of the Hadar Institute and the author of "Abraham Joshua Heschel: The Call of Transcendence." You can follow him on Facebook or on Twitter at @HeldShai. The opinions expressed in this commentary are his.

(CNN) -- It's been a rough week for America, but it's been a good week for masculinity. No, not because we had to endure another display of Donald Trump's bellicose machismo, but because we witnessed two of the most powerful men in the world allow themselves to shed tears in public.

Speaking of his love and appreciation for first lady Michelle Obama, President Obama was moved to tears. And, surprised by the president's decision to award him the Presidential Medal of Freedom, Vice President Joe Biden cried, too. Might it be that we are finally, blessedly, moving beyond a world in which "big boys don't cry"?

To be sure, there are resisters and naysayers. To take one example, media personality Laura Ingraham insisted that Obama's crying was an act. After all, she said, "I've never seen a man grab a tissue and dab, I've just never seen that ... A man will be like 'whatever' or, like, fake through it or something."

In other words, even though he might be moved to cry, a real man would never show it. Eight years ago, Ingraham mocked NFL star Brett Favre for being a "big hulky man" who "broke down blubbering" at this retirement press conference." "Enough with the waterworks," she demanded.

Can a real man not cry? And if he does, must he hide it?

I say: Let the tears flow.

What makes someone a "real man"? Who do we want our sons to be? And who do we want fathers and husbands to be?

Is the only "real man" an alpha male, one who denies his own vulnerability -- sometimes denying it so forcefully that he mocks or denigrates (or maybe just sneers at) those he sees as less than perfect, as too vulnerable, as insufficiently tough and guarded? Might it be that in this day and age a major part of what it ought to mean to be a man is an ability to admit that we are vulnerable, to be as tender as we are tough, to live with our hearts open and to refuse to be ashamed about it?

I am grateful to live at a time when a man -- the most powerful man in the world, no less -- can model what it means to let life affect him to the point where tears come. Would you want to be married to a man who has never been moved to tears by his love and appreciation of another human being?

But I am not kidding myself. We have a long way to go in transforming masculinity. There are still far too many men -- and, if we take Ingraham's comments as evidence, women too-- who insist that real men don't cry, that a man with a tissue is really just a "sissy." (That kind of regressive masculinity, it seems, will now enter the Oval Office.)

Make no mistake: That kind of thinking and talking has real consequences for men and boys. My father died suddenly when I was 12 years old, and I remember -- it is etched into my mind and my body -- being firmly instructed by a well-intentioned relative, "You can't cry. You have to hold it together."

I recall being told by countless visitors that "I had to be strong for my mother." And so I walked around for years pretending to be OK, tough, strong, even though I had just lost everything. That kind of repression takes a toll on a man's emotional and physical health.

I hope my sons will one day find a love so deep that it moves them to tears, and I hope that they remain unaffected by those who would deprive them of the full range of human emotion. When all is said and done, those who mock men who cry do little but betray their own emotional impoverishment.