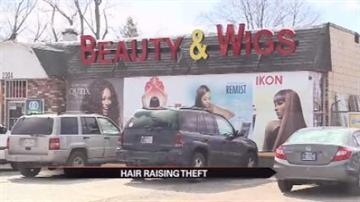 SOUTH BEND, Ind. -- A South Bend store owner found himself in a dangerous situation over the weekend after he confronted a woman he says stole hair extensions.

South Bend Police got call around 6 pm on Saturday to the Save More Beauty off of Lincolnway West.

"Two females entered the store and the clerk immediately became suspicious because they had separated company,” said Ian McQueen, spokesman for the South Bend Police Department.

McQueen says that's when the owner went into the back room to check surveillance tape.

"Sure enough, one of them concealed a couple of boxes of hair extensions in her handbag,” said McQueen. "So he walked outside to confront them but they had already made it outside of the door and they climbed into a van and he went to the van."

Police say the owner grabbed one of the women's purses out of the vehicle they were in and took out one set of hair extensions.

That's when they pointed a gun at him and said drop the purse, according to police.

"And threatened if he did not return the purse to her she would shoot him. So he dropped the purse at that stage and they drove off,” said McQueen.

The store owner, who did not want to go on camera, said the extensions that the woman stole run around $20 each.

His customers can't believe he put his life on the line for $20.

"Especially for $20 hair. Just let it go. But I know him and he's well it seems like something that he would do,” said Vikki Chambers-Hunter of South Bend.

Although he walked away with his life and one set of stolen extensions, his actions are not something police recommend.

"What we would recommend is that particularly knowing that they have good surveillance video they simply gather the evidence and they report it to police immediately,” said McQueen.

The owner said that he did not want to risk the time it takes police to respond to a situation like this, so he took matters into his own hands to retrieve his merchandise.

He supplied a copy of the video to police so they can look for the suspects and their vehicle.