Theo Riddick is ready to run against Oklahoma 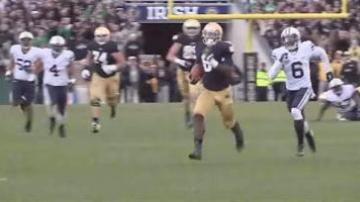 NORMAN, Okla. -- With George Atkinson III out, the Irish run game would take a bit of hit. Fortunately, senior running back Theo Riddick was in the mix.

Riddick has flip flopped the past three years. He started out at running back and then switched to slot receiver. He was put back at running back for the final two games of  the 2011 season and based on his performance so far this year, it seems that’s where he belongs.

“When you can see it and smell it man, it gives you a whole new urge,” said Riddick as he described the feeling of rushing towards the end zone.

Wide open space is something Riddick is beginning to get used to.

“You know, everybody knows Theo to be a jump cut runner,” said Irish inside linebacker, Manti Te’o. “But, Theo is a north and south dude who just utilizes his agility whenever he needs to."

Riddick’s north-south abilities flew under the radar until this season and he’s taken fans, analysts and even coaches by surprise.

When we asked Head Coach Brian Kelly who on the team has surprised him the most--- Riddick came to mind.

And his numbers are impressive. Riddick leads the team in both carries and rushing yards. He ran for 143 yards against BYU posting his second 100 yard game this season. The only people who don’t seem surprised by his stats are his teammates.

“To see Theo doing what he’s doing is no surprise to us. And he’s going to continue to do that,” said Te’o.

Riddick attributes his recent success to the offensive line and said his personal performance still isn’t up to speed.

“We’ve got a lot more games to win. So, it all sounds good but not content,” said Riddick.