Thief leaves multiple clues behind at Zolman Tire in Niles 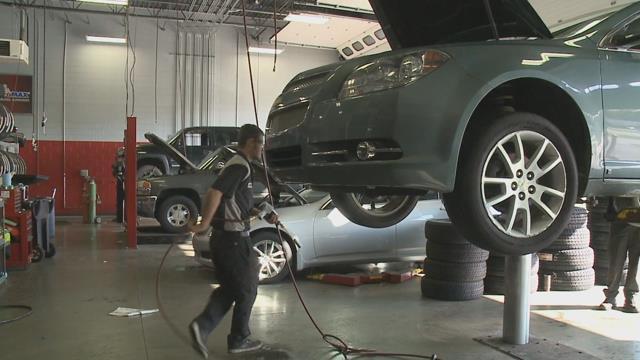 On Tuesday morning surveillance cameras recorded a burglary at Zolman Tire in Niles. The video shows a series of frustrating incidents for the thief.

Employees at Zolman Tire watched the surveillance video and commented on series of events. The clumsy suspect got away with cash but left a lot more behind.

Owner Nate Zolman says he is grateful none of his employees were harmed but now it’s just a matter of principle.

“Someone violating your property and you work hard try to do the right thing, have nice facilities. Any business would feel the same way,” says Zolman.

The surveillance video shows a suspect breaking a lobby window in the dark. The suspect then heads straight for the cash drawer setting off motion sensors that turn on all the lights in the lobby giving a clearer picture for the camera.

“I was listening to some of my employees watch the video and they were more upset than I was because that’s where they stand. That’s where they work this is their home for 10 hours a day,” says Zolman.

So the employees studied the surveillance footage catching a few details. Not only was the suspect recorded in a well lit room, he also touched multiple items in the store.

The suspect left one last clue. The suspect was cut by shards of glass while fleeing through the broken window.

“We have fingerprints, blood, surveillance, and possibly we have the type of vehicle,” says Zolman.

With all the information Zolman is hoping police are able to catch a suspect.

As of Wednesday Berrien County Sheriff’s Department says they don’t have any one in custody.