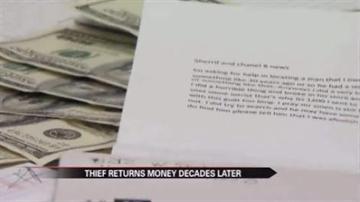 MICHIGAN -- The guilt for a self proclaimed thief in Michigan was too much to bear so he made amends and re-paid his victim three decades later.

It all started with a letter to police that read: I am asking for help locating a man that I owe money.

Inside the envelope were twelve $100 bills.

The writer explained how he stole cash from what was then a convenience store in Barry County in 1983.

The sheriff's department tracked down the owner and he was surprised to see that cash 30 years later.

"He was shocked just as much as everybody else was because this does not happen every day," said Undersheriff Bob Baker, Barry County Sheriff's Department.

Deputies say he likely was not a career criminal but a onetime thief with a big conscience.