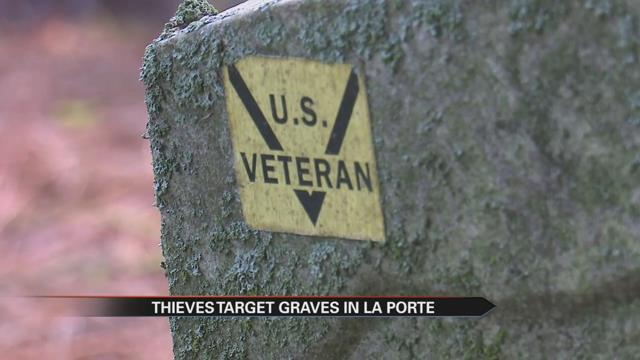 There are over 1,500 veterans buried in La Porte's Patton Cemetery.  Patton is one of the more than five cemeteries in La Porte County that are seeing missing or damaged medallions that show who served the United States.

Jim Hiles, the Financial Officer of the American Legion Hamon Gray Post 83, says "its a slap in the face to veterans."

Hiles is an army veteran.  He says this it take these medals away that they have earned and for a way for us to mark their cemetery plots I think that’s one of the worst things you can dos a tragedy.

"It hurts to see this happen its not hurting just us as veterans its hurting those families. And some people have no one left;  no one left in their family tree to carry on their memory." Hiles adds, "[these medallions] are the only thing out there to let you know they were soldiers."

The Patton Cemetery dates back to the Revolutionary War; there are soldiers buried from every U.S. conflict since then.  Hiles says its the older ones that are the most difficult.  He says that the oldest tombstones have eroded so much, it's hard to determine who is a veteran.

In those cases, the American Legion has been using stickers to try and identify veterans.

Grace Goers is one of the lucky ones. With four family members buried in Patton, and two veterans, her family plot's haven't been targeted.

She attributes it to the cheaper, less-valuable medallions that her brother and husband have on their graves.  These don't attract the attention of thieves because they aren't worth as much.

Goers says that doesn't matter to her.  "The plaques are what honor them, not what they're made of," she adds.

But the situation still angers her. "to take these medals away that they have earned and for a way for us to mark their cemetery plots I think that’s one of the worst things you can do," Goers adds.

She hopes that this message reaches the thieves, and that "maybe they can the feeling we do when we come out and visit our loved ones."

The American Legion is working to raise money to replace the stolen and damaged medallions. It will cost about $5,000 to do so, and they've only raised about $2,000.