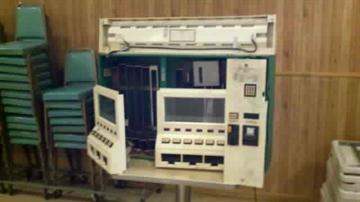 MISHAWAKA, Ind. -- Finding stolen property isn't unusual for Mishawaka Police, but Tuesday morning they had their hands full taking a stolen pull tab gambling machine out of a house on the 900-block of Fourth Street.

"Pretty heavy, two people would actually have to struggle to actually lift it up," described Steve Vellner, Quartermaster of VFW Post 360 where the machine was stolen from.

At about 5:30 a.m. on Tuesday, a passerby noticed two men breaking through the front door of the post on Jefferson Boulevard.

"They came through the front door and peeled the front door back like a sardine can," Vellner explained pointing to the twisted pieces of metal from the door.

After coming through the front entrance the thieves tripped an alarm, but they continued through the building and smashed glass out of a door leading to the post’s bar.

"Then basically loaded up the pull tab machine and went out the side door and they were gone before the first squad car showed up," Vellner explained.

But, they didn't get far.  Police arrested Mark Young, Jim Clayton and another suspect within a few hours and later found the machine in Clayton’s apartment which is only a mile away from the post.  Clayton’s family was on scene as police searched the home, they said he had been going through a rough time.  This wasn’t his first burglary either; a few years ago his family said he stole from a Between the Buns restaurant.

“He's a good guy, he works, he's got work tools…he actually has side jobs he does for people but I don't know what would've made him do that,” explained Michael Binder, who lives downstairs in the same home as Clayton.  “Times are hard but I didn't think they were that hard, it's crazy."

Binder and other neighbors said they heard the commotion as Clayton and his accomplices struggled to lift the heavy machine into his upstairs apartment.  Some even heard suspects shouting at each other about how to lift the machine.

"Just some tussling around up there, I didn't know what was going on so I didn't pay much attention to it," Binder described.

For all the work the thieves put in, there wasn't much worth stealing.

“There wasn’t any appreciable money inside of it," explained Vellner, who had emptied the machine on Sunday.  “They rifled through all the tickets which basically are worthless unless someone's going to redeem them."

They also busted open the money drawer and Vellner estimated that they probably didn't find more than $40.  But, he explains they likely caused a few thousand dollars in damage to the two doors and the machine.  The Pull Tab game itself cost $1,500 when the VFW bought it two-months ago.

“Everything’s twisted and warped,” described Vellner as he examined the damage to the machine.

Clayton’s neighbors also said police found drugs and drug paraphernalia inside his apartment.  Mishawaka Police didn’t confirm what else they’d found, but Clayton’s family said he has been dealing with a drug problem.