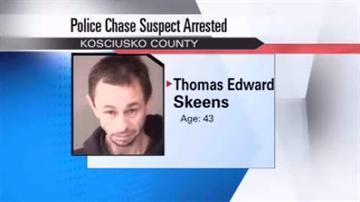 KOSCIUSKO COUNTY, Ind. — A third suspect who led Kosciusko County deputies on a chase late last week has been arrested.

According to Michiana's News Channel, sheriff's deputies were sent to a home in Warsaw. Skeens and two other people fled.

Skeens took off on foot after his vehicle became stuck in high water.

Tipsters called 911 after spotting him. He was arrested shortly afterward.