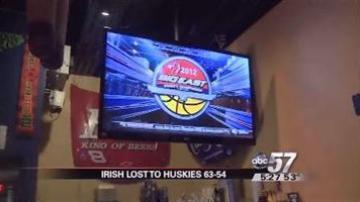 The Irish fell to the UConn Huskies with a score of 63 to 54 Tuesday night in Hartford.

Despite the loss, Irish fans say the UConn/Notre Dame rivalry has made this season even more exciting.

"It's a great rivalry,” said Paul Alexander. “You can't get any better than this and this is what makes Notre Dame even better.”

The Irish are still expected to earn a No. 1 seed in the NCAA tournament.