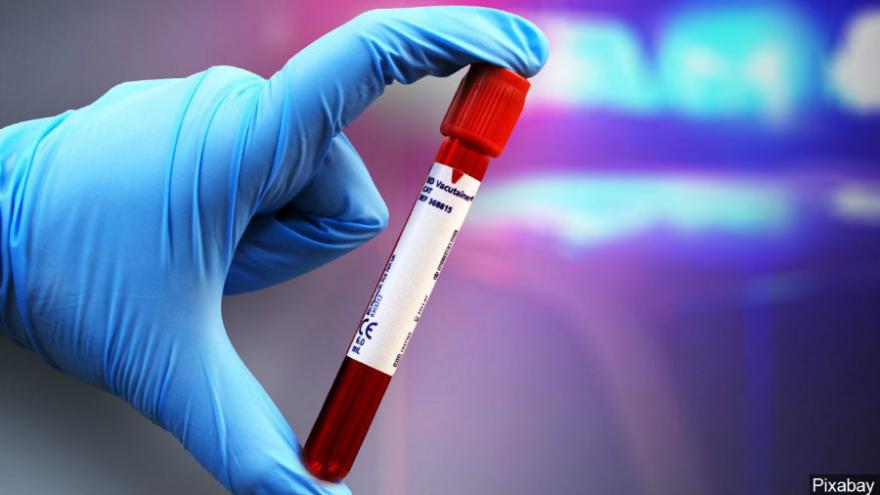 (CNN) -- Scientists have made progress on developing an experimental blood test that could detect many types of cancer in their early stages, and possibly even their locations in the body.

The noninvasive blood test was shown to detect the presence of common tumors of the ovary, liver, stomach, pancreas, esophagus, colorectum, lung and breast, according to a study published in the journal Science on Thursday.

This blood test, called CancerSEEK, could cost less than $500, which is comparable to or lower than other screening tests, such as a colonoscopy, according to the study. The study was funded by many foundations, research groups, and grants, while many of the study authors have ties to biotechnology or pharmaceutical companies, as well as patents.

Yet as of now, the study only "lays the conceptual and practical foundation" for a cancer-screening blood test and much more research needs to be done before such a test could be widely used, the researchers wrote in the study.

The researchers hope that their test could make detecting early-stage cancers easier in the future.

"The success rate of therapeutics and surgeries is going to be much, much higher, we believe, if the cancer is found very early, before symptoms," said Dr. Nickolas Papadopoulos, professor of oncology and pathology at Johns Hopkins Medicine and senior author of the study.

"This is the first step," he said about the study. "The results are good enough to warrant the next step, which is to test this in a screening setting, meaning in thousands of individuals that actually do not have cancer and see really how well our test works."

How accurate was the test?

With the exception of detecting blood cancers, however, those tests "generally can't absolutely tell whether you have cancer or some other noncancerous condition," according to Mayo Clinic's website.

Rather, the tests offer doctors clues as to what's going on inside your body.

For the blood test approach used in the new study, the researchers combined assessing levels of circulating proteins in the blood and mutations in cell-free DNA.

Specifically, the researchers evaluated levels of eight proteins and the presence of mutations in 2,001 genomic positions to detect signs of cancer.

Dr. Martin Widschwendter, a professor and head of the department of women's cancer at University College London, who was not involved in the new study, described the approach as "groundbreaking."

"All these different components in isolation have been demonstrated in the past for individual cancers. The groundbreaking nature is that blood protein markers have been combined with DNA markers and analyzed in a set of individuals with various cancers and controls," he said.

The test was then given to 1,005 patients who previously had been diagnosed with stage I to III cancers of the ovary, liver, stomach, pancreas, esophagus, colorectum, lung or breast.

Currently, no blood-based tests are in common clinical use for earlier detection of those cancers, the researchers noted in their study.

The average sensitivity of the tests was 70% among the eight cancer types, researchers found. CancerSEEK was able to detect 98% of ovarian cancers, but when it came to the much more common breast cancer, the accuracy was significantly lower, at 33%.

The researchers also developed an algorithm to determine the source of the cancer identified in the positive tests, and they were able to localize the source to a single organ in an average of 63% of these patients.

The researchers also gave the test to 812 healthy patients and found that only seven of them resulted in a false-positive.

The study had some limitations, including that the patients in the study already had been diagnosed with cancer, mostly based on symptoms. So patients in a real-life screening likely would have less advanced disease and might be more difficult to test.

Also, in a real-life scenario, even healthy patients who would be tested could have inflammatory or other diseases that could skew test results, which wasn't seen among the healthy patients in the study.

The researchers have moved forward with a follow-up, five-year study to further evaluate the blood test, Papadopoulos said in a teleconference with reporters on Friday.

'There is a long way to go'

While the recently published study appears "promising," several of those caveats need to be addressed before researchers can contemplate how the blood test might play out in screening settings, Mangesh Thorat, deputy director of the Barts Clinical Trials Unit at the Center for Cancer Prevention at Queen Mary University of London, said in a written media statement.

"This is only a case-control study, and therefore needs further evaluation in large cohorts more representative of (the) general population," said Thorat, who was not involved in the study.

"The sensitivity of the test in stage I cancer is quite low, about 40%, and even with stage I and II combined it appears to be around 60%. So the test will still miss a large proportion of cancers at the stage where we want to diagnose them," he said. "The proportion of common cancers -- breast, lung, colorectal -- detected is again not as high as other, rarer cancers. This may mean that a screening program has to test a very large number of individuals to detect one cancer."

While far more research needs to be done to develop such a blood test to detect early-stage cancers in the general population, the new study provides an additional piece to that puzzle, said Widschwendter.

"There is a lot more work to be done before a blood test can be offered for early diagnosis of a combination of various cancers," he said. "There is a long way to go before we can actually do this."