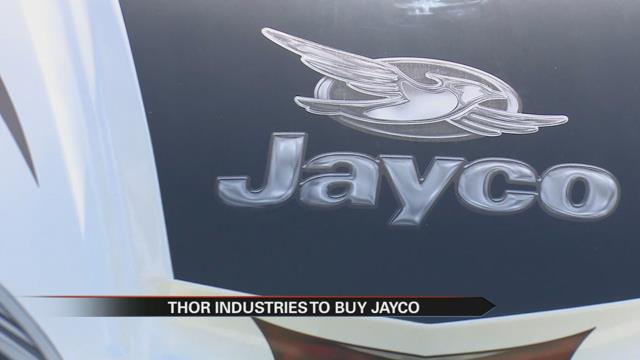 Leaders at Thor and Jayco say this is not going to change the everyday operations for employees and they believe the deal will help them become a stronger force in the RV industry.

“For Thor and Jayco to partner to go forward in the future is a big deal and I don’t see it as a real change in the market place,” says Derald Bontrager, President and CEO of Jayco.

Bontrager says Thor and Jayco products will still compete as usual and the plants will be operated the same.

“I think in the end though it helps the consumer receive better service and better products at a lower price,” says Derald Bontrager, President and CEO of Jayco

Bontrager says both Jayco and Thor can share resources in a shrinking industry.

Before the recession in 2009 there were 110 RV manufactures and now there are about 70.

Bontrager says it makes more sense for those left to create bigger, stronger companies that will be able to weather future financial slumps.

“This is something I’m excited about and I’m definitely excited for them to be a part of the Thor family,” says Bob Martin, Thor President and CEO

“That is definitely going to help us as we see the younger buyers coming into the industry and we see that as being the growth of the industry,” says Bob Martin, Thor President and CEO

Bontrager adds this is a good sign for a core industry in Elkhart County.

“We can move forward with aggressive growth plans and be here for many years to come,” says Bontrager.