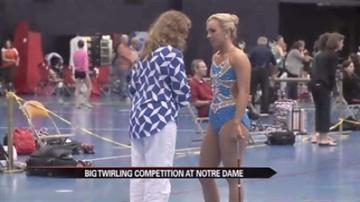 NOTRE DAME, Ind -- Thousands of the best baton twirlers in the country wrapped up one week of competition. The USA and World Twirling championship brought people from all over the world to South Bend.

Catherine Watters, the 2011 Miss Majorette of America said, "This whole week there's about 2,500 participants on average but right here there's about a hundred competing right now."

Watters said the costumes are the biggest cost to the competition.

"My parents spent several thousands of dollars over the years so it depends if you buy a new or old costume or a used costume, but they can range anywhere from $200 to $1,500," Watters said.

Participants from the competition brought a lot of business to South Bend.

Shirley Devenney said, "People are from all over the United States plus we have some from the Virgin Islands and a couple foreign countries. We have several thousand, the group competition was this morning and now this is the world open twirl individuals!"

"If they're spinning around five times with a chrome pipe over their head, they better know where it is, so technique becomes very important," Devenney said.