Thousands of dollars worth of property missing from storage facility 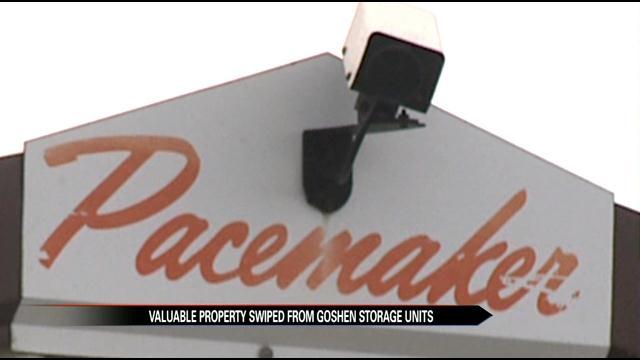 A renter says his $23,000 Harley Davidson motorcycle was stolen from his storage unit at Cardinal Storage in Goshen.

Scott Reinhart, a renter, said he is left with very few options at this point.

He feels betrayed by the storage facility after he discovered his $23,000 motorcycle was gone.

He has been posting and handing out a homemade 'stolen motorcycle' sign with hopes that someone will notice his Harley around town.

“I needed a place to store my bike, my Harley before winter came in,” said Reinhart. “They've got fencing with barbed wire, they have security cameras, 24-hour surveillance, and video cameras and patrolled.”

It all looked like a great deal on the outside looking in, but Monday, Reinhart said he found out the storage units were not as good as they once seemed.

“Monday was getting warm, so I headed out there to get my bike out,” said Reinhart.

His Harley was nowhere to be found, and that was not the only thing that raised some eyebrows.

“What bothered me the most is that my lock is gone and he put his lock on, so obviously he knew there was a problem,” said Reinhart.

His locks were changed.

“In the meantime he's telling me, ‘We've just had a rash of thefts, multiple units broken into since at least February 1st that he knew of,'” said Reinhart.

Police say only three calls came in about break-ins at the property.

The first one was from the manager on January 22nd.

The second one was one month later from a renter on February 10th.

The latest was made by Reinhart on March 11th.

“I don't know if it was stolen a week ago or two months ago. In 24 hours, most Harley's stolen are in Gary or Detroit or Chicago,” said Reinhart.

He feels Cardinal Storage did not uphold their portion of the contract, because when he asked to see the cameras he was told they do not work.

He said they cannot afford them, but he said he has a barbed-wired fence and a locked gate around the clock.

Reinhart said he feels cheated due to false advertising of security.

The manager of Cardinal Storage said he believes nine break-ins have happened. He said it seems the burglars come in and switch locks so the units don't look suspicious.

Reinhart is pleading for anyone else who stores their belongings there to make sure none of their stuff has been taken.

Police say they are continuing to investigate.
Share this article: