Thousands rally in Indianapolis for Red for Ed Action Day 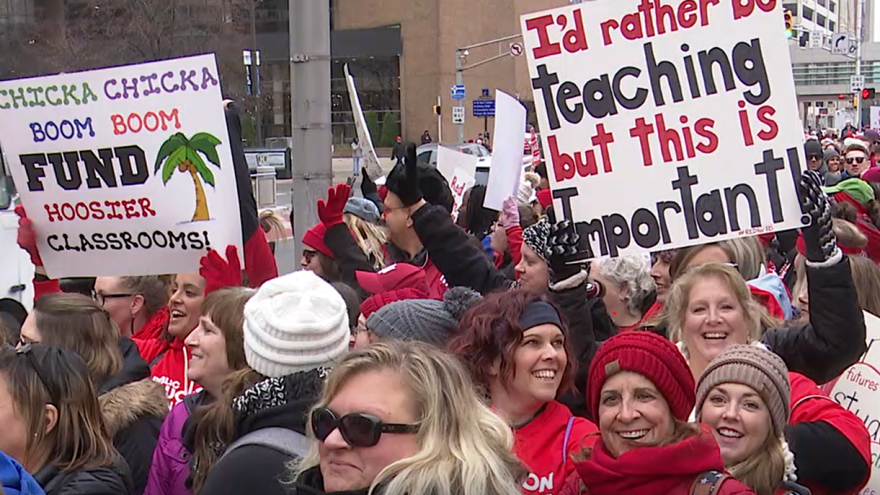 INDIANAPOLIS, Ind. --- Thousands of educators and supporters rallied in Indianapolis on Tuesday in support of Red for Ed Action Day. Supporters called on state legislatures to increase salaries and education funding overall.

A sea of red surrounded the Indiana State Capitol to support making classrooms a better place throughout the state.

Future educators from IUSB said they have not even entered the field professionally yet, but already had concerns, which prompted them to come out and show support.

Taylor Pyzynski and Blake McBrier already learned that resources for teachers are scarce and believe teaching should be what students need to know in life and not be limited to teaching to a test.

“And what comes down to it is our kids are our future,” said Taylor Pyzynski, IUSB Student Studying Special Education. “And if we’re just not going to give them the best set up for their life, then they’re not going to succeed and where are we going to be when our kids don’t succeed.”

Teachers from across the state said at the end of the day the rally is all about the kids because that is who matters the most.

“We’re all here for students and to me, clearly, that’s what matters most,” said Andrea Gialamas, social studies teacher from Fort Wayne.

One Indianapolis teacher has been with the school system for nearly 48 years said she has worked long enough to make the salary she needs, but decided to rally because that is not the case for younger teachers.

“And so the students are definitely in need of teachers who are going to put students first,” said Jo Anne Cornett, teacher for Indianapolis Public Schools. “Who love them and who care about them.”

Another Indianapolis teacher said students are put under a lot of stress, especially with standardized testing.

“I bet not one of you with your eyes closed fondest memory is ‘I did this on a state test,’” said Sandy Padgett, teacher in Indianapolis. “Think about those opportunities you were given in your classroom as a child and are you giving those same opportunities to our kids today? That’s where we need your help."

Cassie Barinard, a teacher in Indianapolis, said educators with the same experience range must jump from district to district just to find somewhere that pays enough, which ends up hurting students.

“Talking is great and positive affirmation is wonderful, but it’s time to do something about it,” said Barinard.

Barinard said she has discussed her concerns with the local school board and the board has made steps in the right direction while acknowledging the problem is not solved, but still it is just not enough.

A local Elkhart music teacher realized that being in the sea of red means she is not alone and said her students deserve more than what they are given.

“We are barely getting by right now,” said Carrie Shank, music teacher at Elkhart Community Schools. “I know that a lot of children are relying on schools just number one for heat, for safety, for food and so we need our school environment…we need that for these kids to have a decent living."