Thousands trick or treat at University Park Mall because of rain 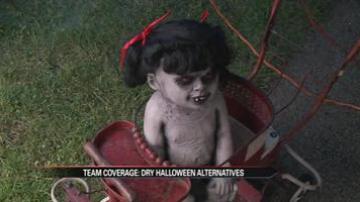 MISHAWAKA, Ind.-- Many in Michiana headed indoors to trick or treat Thursday night because of heavy rain.

Some of the stores giving out candy said they were told to prepare for almost 4,000 trick or treaters.

Elizabeth Williams said, “Even in the past two days with it being rainy, we’ve seen a lot of people coming to the mall. With puddles outside and the cold you don’t want to get the kids sick, so it’s better to have them here and inside.”

Williams said she bought more than $200 worth of candy to give out to the kids.

Williams said, “I love decorating and getting set up and maybe doing a haunted house at home, but this year I’m going to be here in the mall with all the kids and it couldn’t be better.”

Although thousands chose to not risk getting wet outside, one mom said the hardcore trick or treaters stay outside rain or shine.

Lorri Fuller said, ”We are total die hard trick or treat fans. We love tricking people and eating their candy. Rain, sleet, or snow we’ll be out here.”

Fuller said she’s ecstatic that other cities delayed their Halloween.

Fuller said, “Saturday and Friday I’m going to be hitting all of their towns because they delayed it from today so I get to go trick or treating three days in a row.”