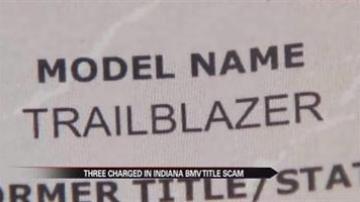 One of the those charged is an Indiana BMV employee.

"These are not victimless crimes. Far from it," said U.S. Attorney Joe Hogsett. "These individuals were responsible for operating their own personal BMV on the streets of Indianapolis."

There may be further court action to recover some of those vehicles with the new titles.

All three could face anywhere from five to 20 years in federal prison if convicted.