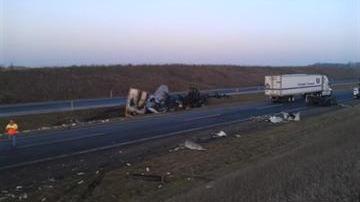 The first accident happened around 4 a.m. in the westbound lane near mile marker 69. Police said a semi carrying salmon veered off the road and when it got back into traffic, it clipped a second semi-truck.

That truck then ended up in the median, caught on fire and was flipped on its side spilling salmon over the grounds.

32-year-old Harish Kumar, who was driving the burning semi was not injured. The second driver, a 44-year-old man from Pennsylvania suffered cuts to his face and broken ribs. He was taken to South Bend Memorial Hospital for treatment.

A Good Samaritan who witnessed the crash stopped to help and was badly burned. He also suffered some injuries that broke his ribs. He was take to the Kalamazoo Burn Center and is in stable condition.

About a mile down the road in a separate accident, police say two semi-trucks collided possibly because of the back-up from the other accident. No injuries were reported.

The third accident on the toll road was about 20 miles from mile marker 69. It was another semi-truck fire crash.

Traffic is down to one lane in the westbound side near mile marker 69. These lanes are scheduled to re-open to traffic at 2 p.m., once the wreckage is cleared. Eastbound traffic is open after being closed for four and a half hours.

The Indiana State Police told us that the identities of the second driver and Good Samaritan will be released once officers are able to reach their families about what happened.

The South Bend Fire Department and the St. Joseph County Sheriff's Department were also on the scene to assist.

Stay with ABC57 News as this story develops.