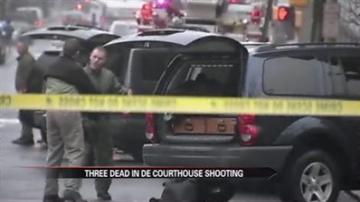 WILMINGTON, Del. -- Three people are dead including the suspected gunman after a shooting rampage at a Delaware courthouse.

It happened in the courthouse lobby around 8:00 Monday morning. That is when police say a 50 to 60-year-old man opened fire.

The Wilmington mayor says the shooter's estranged wife is one of the two victims but police have not confirmed that information.

Those serving on jury duty were just arriving when the shooting happened.