Three killed, more than 20 injured in multi-car pileup in Virginia 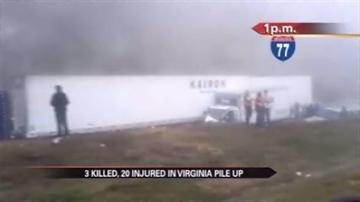 CARROLL COUNTY, Va. — Three people have been killed and more than 20 were injured in a 75 car pileup.

It happened around 1 p.m. Sunday afternoon in Interstate 77 near the Virginia-North Carolina border.

VDOT says the traffic was backed up for eight miles.

The interstate was closed in both directions.