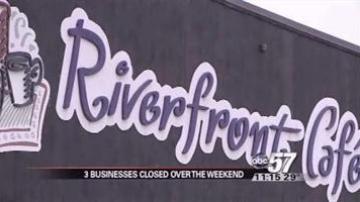 NILES, MICHIGAN, -- Over the weekend, two popular restaurants, The Riverfront Cafe and Millenium Steakhouse, closed their doors for business.  The Shoppe Salon also closed.  The President of the Niles Chamber of Commerce said he can not believe this is happening.

"It has not been a good day for Niles", Said Niles Chamber of Commerce President Ron Sather.

Ron Sather said this is the first time in all of his 14 years as the President of the Chamber of Commerce, that he has ever seen three businesses close at one time.  He said three doesn't seem like a huge number, but the number of people that it will leave out of work is.

"It's the people that work there between three businesses we have upwards of 100 people out of work,"said Sather.

He said the two high class restaurants closing were a complete shock.  One of them was still deciding up until Friday whether it could make it in the Niles economy, but ended up throwing in the towel.

The closings had nothing to do with the service or food fo the restaurants but with the economy changing people's habits.

"Not as many people are eating out. People don't have expense accounts like they used to," said Sather.

Even though customers are not as plentiful, that doesn't mean Niles is without hope.  Niles had a grand opening last week.  But, the two restaurants will be hard to replace.

"The Riverfront Cafe and the Millenium Steakhouse both drew a large following from Granger from Plymouth from South Bend from Mishawaka," said Sather.

The upside? New business owners will be able to move in fast, because of the two new open prime locations and he hopes the Niles economy will turn around as quickly.