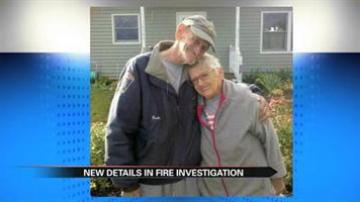 THREE OAKS, Mich. -- The Chikaming Township Volunteer Fire Department arrived to the Three Oaks fire within minutes of the first 911 call Thursday morning. In such a small community, the firefighters often know the victims. In this case, one of the victims, Orville Kiernan, was a firefighter with Three Oaks for a long time.

"When the pager goes off you can be in a very deep sleep and within probably two minutes you are already out of your house," said Mike Davidson, Chief of the Chikaming Township Volunteer Fire Department.

For volunteer fire departments like Three Oaks and Chikaming Township, the response process is a little different.

"They live in the community for which they serve," said Davidson.

As soon as that pager goes off, they drop everything and rush to the station.

"In the middle of winter like this you might have to clean off your car or something and then you've got to drive safely to the fire station, then get your gear on and get out the door, on a fire truck and do that all within minutes," said Davidson.

Davidson says every second counts so firefighters have shortcuts, like they leave their boots in their pants to cut time.

"Your goal is to be on a fire scene anywhere from 8 to 10 minutes," said Davidson.

This may sound like a long time for the people on the other end, waiting for help.

"When the smoke detector goes off you could have a minute and a half to two minutes to get out of the house and when you are talking about saving our life you will be out of that house in less than a minute," said Davidson.

But if it doesn't go off, you don't have time.

"It does eliminate that window. It's very unfortunate you don't have any prewarning," said Davidson.