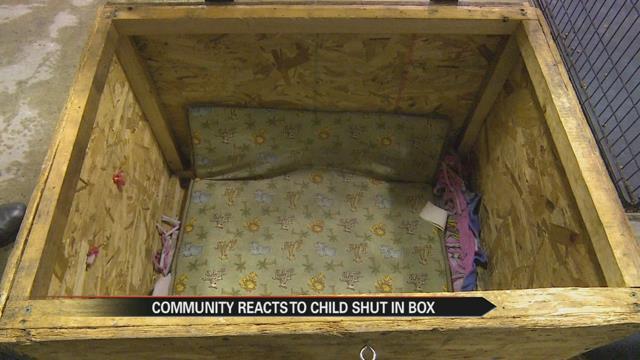 The three people charged with neglect of a dependent for allegedly locking a toddler in a box appeared in court Monday morning for their preliminary hearing. ABC 57’s Jess Arnold was the only reporter in the courtroom.

All three are being charged with neglect of a dependent after allegedly locking Chris Short’s three-year-old daughter in a box no bigger than a dog cage between December 9 and the 13.

“We got a tip from the prison that there possibly could be a little girl being held in a box overnight. Family members said they could hear her crying,” said Pulaski County Sheriff, Jeffery Richwine.

They obtained a search warrant and went to the house where the little girl was allegedly being held on December 14.

Sheriff Richwine demonstrated how the house was laid out.

He said the box would have escaped their notice if they hadn’t been looking for it.

“The box was shot, approximately 34 inches long, probably 24 by 24. It had a top to it. Inside it was a little girl, and there was a couple blankets in there and then a small thing sleeping pad. This house was full of bugs, cockroaches everywhere, this box had cockroaches in it. She was laying in their asleep,” said Sheriff Richwine.

“This is a unique one from my experience, and I’ve been doing this for 18 years now,” said Pulaski County Prosecuting Attorney, Daniel Murphy.

“I think this is very important for our county and for all people at large to pay attention to what happens here, so we can protect the children,” said Prosecutor Murphy.

The five other adults who are being charged with failure to report will appear in the Superior Court at a later date.

In the meantime, the child's grandfather is trying to gain custody of her and her brother.

“I’m devastated by it, you know, if they didn’t want them. I’ve tried to tell them all, I’ll take them in a minute,” said the little girl’s grandfather, Frank Jackson.

Frank Jackson has been working to gain custody of his two grandchildren since his daughter died two years ago.

The three-year-old girl found in the box has an older brother who is seven years old.

“I just don’t understand why they could do this to the kids, knowing there’s a good home for them to go to,” said Jackson.

“Oh, it just breaks your heart, and even the other kid in the house, just looking at it, you think, my God, how did this happen?” said Sheriff Richwine.

Sheriff Richwine says while maybe not this severe, cases of child abuse are all too common.

“We see this on a regular basis, to be quite honest, I think. I think we see kids putting back in the house that should never be in there, I think,” said the sheriff.

“I mean if you can lock a child in a box for long periods of time, who knows what he’s capable of?” said Jackson.

Both think the problem is in Child Protective Services’ policy.

“I’ve heard several DCS people say that their plan is to put families back together…somewhere you got to say that’s probably not the best environment for these kids whose parents can’t and won’t get their acts together,” said Sheriff Richwine.

In the meantime, the sheriff has a short-term plan.

“We’ve gotten with the prosecutor, and what we’ve decided we’re going to do is start arresting people for neglect,” he said.

He’s hoping that eventually innocent children will end up not in boxes but in loving homes.

“I would like to at least have the opportunity to try to raise these kids,” said Jackson.