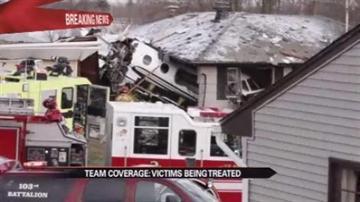 There were a total of four people on the plane. Two died and two survived.

The two victims on the plane were identified as Wes Cave and James Steven Davis, a former OU quarterback.

Jim Rodgers, 58, of Oklahoma, who was on the plane, is in serious condition. He was in surgery for about four hours.

Christopher Evans, 36, of Oklahoma, who was also on the plane, is in fair condition.

Diana McKeown, 62, of South Bend, who was on the ground, is in fair condition.

"They arrived here I believe it was approximately half an hour after the crash had happened,” said Scroope.

All three were taken straight to the trauma unit.

"Stressful as it was for the staff we had plenty of resources to treat these patients plus any others that came through our doors,” said Greg Bingman, Trauma Services Director.

Bingman says it is the only trauma center in the region.

“We've been a designated trauma center since 2006. We are all level to adult trauma center meaning that we have been verified by the American College of Surgeons to treat probably 99 or 98-percent of trauma patients that come to our door,” said Bingman.

Rodgers and Evans family were still on their way to Memorial Hospital from Oklahoma early this evening.