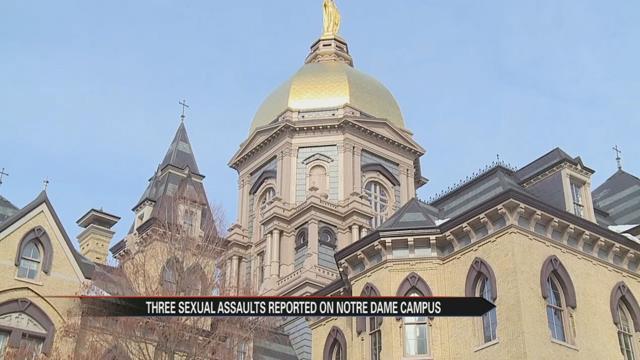 The University of Notre Dame has confirmed they received three reports of sexual assaults that took place on campus over the weekend.

Only one of the victims chose to involve law enforcement in the incident, so the other two incidents are not being investigated by police.

For now those incidents are being pursued solely by the university. The victims can change their minds later on, which police encouraging them to do.

“The university only has so much power to be able to affect another person, all they can deal with is their students and if that student remains a student. The criminal justice system has a few more hooks,” said Ken Cotter, St. Joseph County Prosecutor.

Working closer with Notre Dame Police comes after concerns from their former staff on the handling of past sexual assault cases. They say not enough reports resulted in criminal charges.

“Let us investigate that as best we can and make a determination of whether or not we can file a criminal charge,” said Cotter.

A county prosecutor now responds to campus when a sexual assault is reported to university police. That new protocol was put to use early Friday morning when a student reported she was raped in the men’s residence hall.

“They called the deputy prosecutor. He was there in a half hour, woke up from a sound sleep, but he went out there and coordinated with law enforcement, they were very forthright,” said Cotter.

The results of the university police’s investigation will then be turned over to the prosecutor’s office for review of criminal charges.

But what about the two unreported sexual assault this weekend?

“With the sheriff we have an understanding now that a victim has a choice,” said Cotter.

Because the two other victims chose to report the crimes directly to the university, rather than Notre Dame Police or St. Joseph County Police, it’s the victim’s choice if they want to move forward with an investigation.

“The victims said that she did not want a criminal investigation conducted. I would encourage all victims to report to law enforcement,” said Cotter.