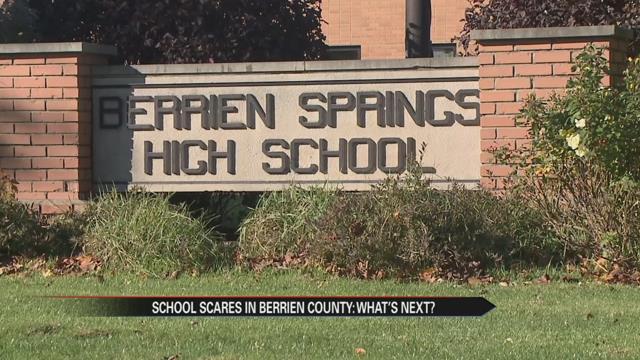 It’s been a nerve-racking week for students, parents and administrators alike.

On Monday, an Eau Claire High School junior was charged with multiple felonies for allegedly bringing a gun to school property the previous week and allegedly making threats on the app ‘snapchat’ to shoot people.

Then on Thursday the principal at Berrien Springs High School had to suspend a 9th grader over threatening to bring a gun to school, according to police.

Jose Gonzalez is a counselor and prevention coordinator at Andrews University who attributes the threats to stressed out kids.

As a counselor, Gonzalez feels it’s a cry for help or a cry for attention.

Pagel said, “I think gun owners really need to take seriously where they store their guns and their ammo. Most of these kids aren’t really old enough to really own a gun themselves so they’re getting it from a parent or an uncle or an older brother or something.”

The gun the Eau Claire student brought to school was stolen, according to investigators.

Pagel said people can start by locking their guns away and using this week's events to have a conversation about threats and why they are taken so seriously.

Pagel said, “Ask them what would they do if they heard a friend mention possibly using a gun. And just start getting them in that mindset that it’s okay to tell, that you’re helping everyone if you do tell.”

District 79 Representative Al Pscholka believes in most cases it should be the parent’s responsibility to monitor their kids’ social media accounts to prevent school violence in the future.

Pscholka said, “The challenge really is for parents. Hey parents out there, set some boundaries, know what your kids are doing and set some rules for your children so we can put a stop to this.”

According to the Michigan Department of Education, there is an anonymous tip program called “Okay to say” where parents can text if they become aware of a possible threat http://www.michigan.gov/ok2say