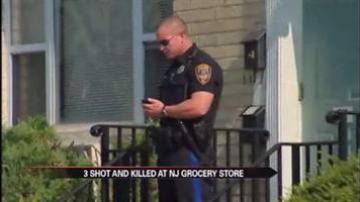 OLD BRIDGE TWP., N.J. -- A man opened fire in a shopping center in New Jersey, killing himself and two others.

It happened around 4 a.m. on Friday inside the Pathmart Grocery Store in New Jersey.

The town's mayor said the 23-year-old suspect is a Marine vet who worked at the grocery store for two weeks.

The mayor said one of the victims was an 18-year-old woman. The other victim was a 24-year-old man.

The county prosecutor said the victims were not specifically targeted, but that everyone in the store was a target.

"The store was closed. The shooter left the store somewhere around 3:30 in the morning and came back shortly thereafter. He entered the store, firing his weapon," said Middlesex County Prosecutor Bruce Kaplan.

Police have not yet released the suspect's name.