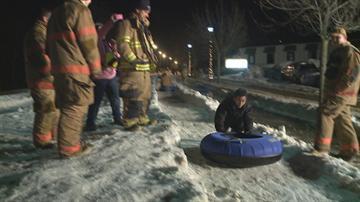 BUCHANAN, Mich. – Unseasonably warm weather may have slowed down sledding, but the first night of Buchanan’s Thrill on the Hill seemed to be a success.

“We had to battle Mother Nature all day, end of January and we’ve got beautiful weather, not the best for tubing but as you can hear in the background people are having fun,” described Buchanan City Manager Bill Marx, as cheers and laughs boomed behind him.

Crews spent all day Friday turning the hill on Front Street overlooking downtown Buchanan into a sledding run.  The day’s warm weather made sledding on the hill a little slow for 60-year-old Linda Moore, who got to be the first official rider for Thrill on the Hill.

“It was a lot of fun, you’d be surprised, if you can go all the way from the top down in one fell swoop that’ll be better, but it was a lot of fun,” described Moore after being given her award, a small inflatable tube resembling the ones provided by the city for sledding.  “I asked for some expert advice from some of the kids up there on how to do it best.”

The kids seemed to have the right idea.  On the somewhat slushy runs, the best tactic seemed to be to lay their sledding tube down, get a running start and jump onto it.  The other option was to have a friend pull you along, which is how this reporter (with the assistance of ABC57’s Ryan Klund) was able to pull off a live shot on ABC57 News at 7 while sledding down the hill.

Still the resounding laughs, cheers, parents pushing children down the hill and Buchanan residents who (sometimes tearfully) declared that it had been some time since they’d seen so many people having so much fun in the city seemed to indicate that the first night of what is hoped to become a Buchanan tradition was enjoyed by the people there.

“This time of year, there’s not a lot going on,” described Bill Marx.  “People are cooped up in their house and now they’re out getting some exercise and enjoying the snow.”

While city officials said the main point of Thrill on the Hill is fun for citizens, local businesses were hoping for some added perks.  As of Friday, ABC57 has been told that the city has sold around 500 passes for sled rides on the hill.  People from across Michiana, and even as far as Bloomington, Indiana, will be coming to Buchanan.

“What a great idea, bring families into town and lots of fun,” explained Jan Quinn, manager of FRONT Buchanan, shop on Front Street.  “Really a good stimulation for winter because we don’t have a lot of winter events here in Buchanan.”

Quinn wasn’t alone in her hopes that Thrill on the Hill would be a shot in the arm for businesses in Buchanan.

“I hope so, I hope so, I’ve got a couple of girls coming in to help tomorrow,” explained Shari Proud, owner of Buchanan Sweet Shop.  “I don’t have extra employees in the winter time so it’s a little bit different for me, I’ve got some of my summer help coming in and I’m hoping it brings in a nice little paycheck tomorrow.”

Winter is usually a slow time for business in Buchanan.  Other Michiana towns put on winter festivals that add entertainment for citizens and draw customers for businesses, Niles’ Hunter Ice Festival is one example.  City leaders say that Buchanan’s Thrill on the Hill will become an annual tradition.

“This will be the start of, I think, something pretty large for us,” Bill Marx explained.

Thrill on the Hill continues on Saturday, January 28th, and begins at 11 in the morning and ends at 8 at night.