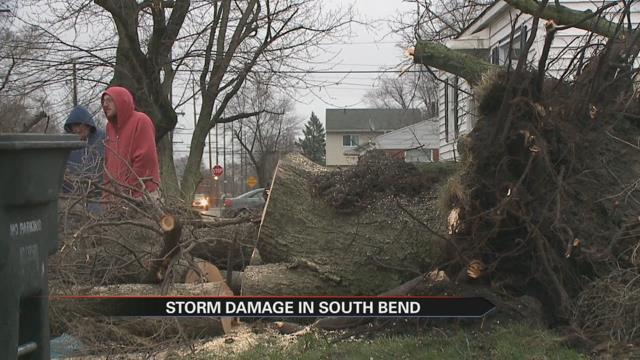 Homes west of Liberty Street were without power for hours.

Neighbors say a large tree took out a few electric lines in the afternoon.

But the damage extended well beyond their neighborhood.

“My neighbor called me and said that she thought a tornado tore through our neighborhood,” said Stephanie Espinoza.

Trees, trash, garages, and even whole parts of homes were damaged during the storm.

Not too many things were safe from Thursday’s unforgiving windy weather, but quite a few folks were lucky.

A tree landed on the side of Espinoza’s home.

“It just missed us, it’s on the side of the house but it didn’t go through anything over here. It just landed on it,” said Espinoza.

Others weren’t as lucky.

“The house started shaking, the windows sucked out, I grabbed her dashed to safety as fast as we could and it was over in a matter of seconds,” said Dante Pantes.

And it only took a matter of seconds to knock out the power.

“It was like dark, really dark, we didn’t even see the storm coming,” said Michelle Ibarra.

Crews worked for hours to turn the lights back.

And it was an inconvenience but not the worst this storm could’ve done.

“I’m just blessed that me and my daughter are safe and just taking it one day at a time,” said Pantes.