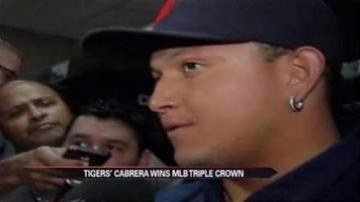 KANSAS CITY -- Gas was only 33 cents a gallon and the cost of a movie ticket was about $1.25. And it has been 45 years since the Boston Red Sox's firstbaseman Carl Yastrzemski won the Triple Crown.

"It's an unvelievable feeling," Cabrera said. "I can't describe how I feel now."

He joins 14 other players in Major League history to win the title.

Now Cabrera tr to win a World Series Championship with the Tigers. The team heads to the playoffs this weekend against the Oakland A's