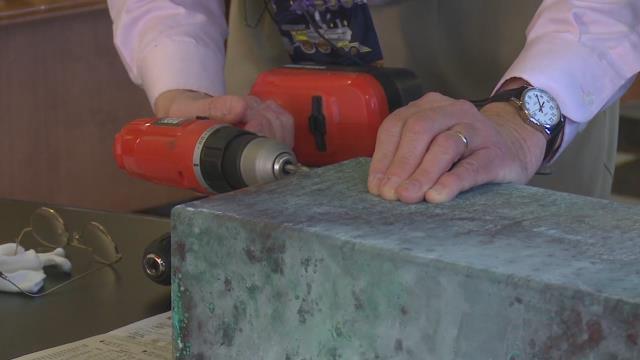 A time capsule from the 1940s was opened Thursday morning after workers found it while tearing down the old Mercy Hospital building in Benton Harbor.

“What we have is a copper box,” Berrien County Historical Association Curator Bob Myers said. “It’s been soldered at the seams.”

With a little drilling and a sturdy snip of some scissors, history was unsealed in Berrien County Thursday morning.

“Alright, let’s see what we have,” Myers said, while opening the small time capsule. “The News Palladium – and the date is October 29, 1949,” he said, while holding up an old newspaper he pulled out.

The old Mercy Hospital building in Benton Harbor is gradually being torn down after sitting vacant for years.

But 67 years ago, a time capsule was placed inside the cornerstone of the growing medical center.

Mercy Hospital was a first-of-its-kind home of medicine in northern Michiana.

Bryan Tutton’s great-grandfather, Dr. Henry V. Tutton, was the mastermind behind the hospital.

“Everything I read about him, all he was focused on, was how do I fix the next patient and how do I make things better?” Tutton said.

The contents of the time capsule serve as proof of his success.

There was a Mercy Hospital School of Nursing booklet, a growing list of hospital staff members in 1949, and a pamphlet describing the hospital’s endless opportunities.

The capsule held eight items in all – including that copy of the News Palladium and various documents honoring the day the cornerstone was laid in the hospital.

They are now prized possessions in southwest Michigan, as the hospital gets formally discharged piece by piece.

“It can’t be forgotten because it delivered so many babies,” Dr. Carter said. “It saved a lot of lives, and it’s something the Benton Harbor community should be very proud of.”

At Thursday morning’s event, a young woman showed up with a framed black-and-white picture. It showed a man handing a small, copper box to another man, while standing in front of Mercy Hospital.

The woman’s name is Britta Pearson, and her great-grandfather was Joel G. Pearson, of Pearson Construction Company, who built the hospital.

“[Wednesday], one of my coworkers mentioned something about the time capsule and he showed me the article and I saw the photo of the time capsule as they had pulled it out,” Pearson said. “And it clicked that that was what I saw in this picture. I never told anyone that I found this photo. And I made a very shrill noise when I put two and two together and ran off to show them the picture.

Pearson’s great-grandfather is the man in the photo who is handing off the time capsule to a doctor.

She had found the picture while going through her late grandfather’s office over the summer.

On Thursday, the picture sat next to the capsule as it was being opened.

It will go on display, along with the items found in the capsule, inside the Berrien County Administration Building in St. Joe through December.

“This kind of brings it full circle,” Myers said. “That cornerstone was put in. Now it’s taken out. The hospital’s coming down. It’s sort of that end of an era, to coin a phrase.”

Demolition of the old hospital building is set to wrap up before the New Year.