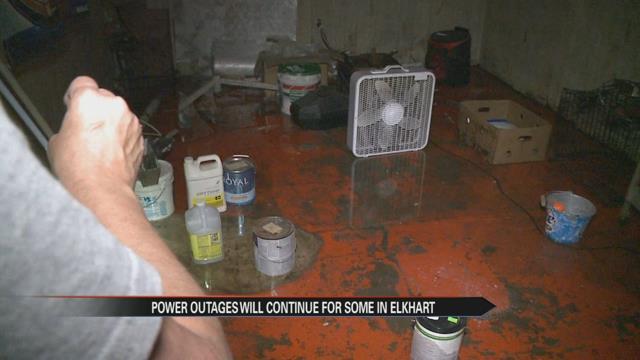 24 hours after the storm and time is of the essence for those in Elkhart who rely on an electric sump pump that keeps their homes dry.

“Oh we are screwed,” says Kelly Rose, of Elkhart.

Rose lives on the Elkhart River off Nadel Avenue and Hester Street where a street sign once stood.

“It didn’t just fall over it was lifted out of the ground and I thought it was on its way to Michigan,” says Tommy Hutkins, of Elkhart.

Hutkins witnessed the tree that didn’t exactly make it to Michigan but instead on top of an electrical line. The down lines knocked out the power that runs a sump pump for homes in the neighborhood..

“The sump pump pumps the river water out and if we don’t have that sump pump our basement is going to be like this,” said Rose.

Rose says she and many of her neighbors rely on the sump pump to keep their basements dry and with every minute the power remains off, the water in her basement continues to rise.

“Oh my God it’s like two inches. The longer they keep it off the worse it’s going to get,” says Rose.

When rose heard AEP’s estimated to have her power back on by midnight she was feeling a little cynical.

“They haven’t been down there I haven’t seen anyone down there,” says Rose.

By 10 p.m. Monday night AEP restored power in 305 of 490 households in the neighborhood. The rest will spend one more night in the dark until the city removes the downed tree.

Once the tree is removed AEP will be able to work on the power line and expects to have everyone in Elkhart’s power restored by 4 p.m. Tuesday.