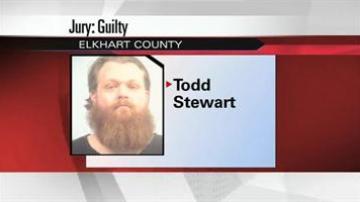 Stewart is accused of shooting and killing his employer, stuffing his body in a barrel and dumping the barrel in the St. Joseph River in September 2012.

During closing arguments, the prosecution reviewed the evidence that they say proves Stewart killed Mark Miller.

The prosecution also spoke about the lies Stewart allegedly told police about where he was the night of the murder and the truck he was driving the night Miller disappeared.

The defense used their closing arguments to point the finger away from Stewart. The defense said  it is possible someone else murdered Miller.

At 5:45 p.m. the verdict was read. Stewart was found guilty.

Sentencing is scheduled for May 29th.