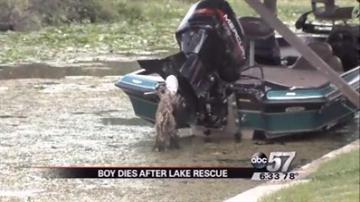 PIERCETON, Ind.-- The toddler who was pulled from Kuhn Lake Saturday has died. His family chose to take him off life support at 3:22pm.

Tucker Farmer was two years old and from Marion, Indiana.

He was pulled from the lake around 7pm Saturday night and wasn't breathing.

A nurse and another man performed CPR.

According to neighbors the boy wandered just a few feet from the lake house he was staying at, and was found face down in an inlet by a boat.

North Webster fire and EMS responded to the scene according to Indiana Conservation Officer, Jonathon Boyd.

Boyd said, “He was not breathing. Several bystanders administered CPR and the child was airlifted to Lutheran Hospital in Fort Wayne where he was placed on life support.”

Neighbors said the scene was tragic.

Boyd says you can never be too safe around the water.

Boyd said, “People forget that when you’re near the shore fishing or swimming or just around the house where there’s water and little ones, it’s important that they have life jackets on. People always think about it when they are on the boat, but not when we’re just fishing from shore or walking around the water.”

The owners of the lake house said the Farmer family is asking for their privacy.